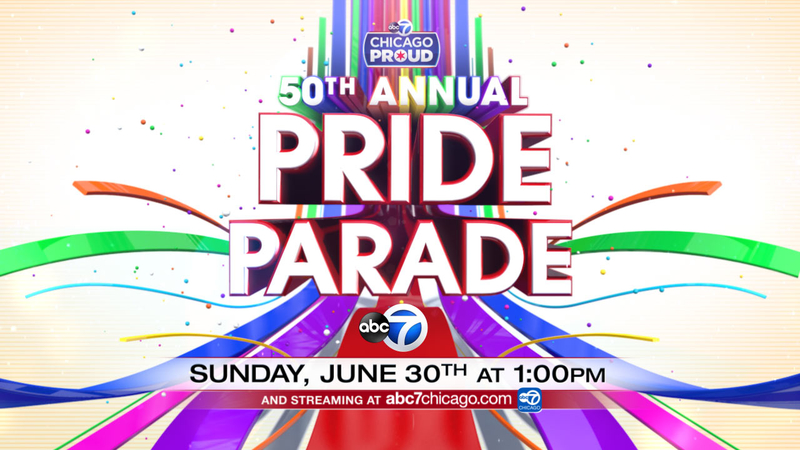 Highlights from the 2019 Chicago Pride Parade

CHICAGO (WLS) -- ABC 7 was Chicago Proud to celebrate LGBTQ Pride throughout the month of June. The only station to broadcast the Pride Parade during its 50th anniversary, ABC 7 also featured news reports and a special edition of Windy City LIVE.

ABC 7 broadcasted the two-hour parade on its 50th anniversary, which coincides with the 50th anniversary of the Stonewall riots. The broadcast was hosted by ABC 7's Entertainment reporter and 190 North Host Janet Davies and WXRT radio personality Terri Hemmert, with ABC 7 Eyewitness News morning team Anchor Terrell Brown capturing all the excitement on the street. Parade Coordinator Richard Pfeiffer stopped by the broadcast booth to give his unique perspective on the parade and this year's theme "Stonewall 50: MILLIONS OF MOMENTS OF PRIDE". He talked about the impact the Stonewall riots had on sparking the LGBTQ movement. The ABC 7 parade broadcast aired on Sunday, June 30, from 1-3 p.m. It was also streamed and featured on demand at abc7chicago.com.

This is the 16th year ABC 7 Chicago has broadcast the parade. The parade kicked off at Noon on Sunday, June 30.

The Pride Parade commenced from Montrose Avenue and Broadway in Uptown. It featured floats, decorated vehicles, marching bands, and walkers representing community businesses, organizations, elected officials and religious leaders. The parade traveled the 21-block route concluding near Diversey Parkway and Sheridan Road in Lincoln Park. As Chicago's second largest parade, the city estimates there were more than one million spectators and people 12 deep lining the streets.

The parade originally started to commemorate the anniversary of the Stonewall riots, the most important event in the history of the gay rights movement.

June has been proclaimed as Pride Month in Chicago. The Pride Parade festivities support the gay, lesbian, bisexual, queer and transgender communities.

Windy City LIVE, with co-hosts Val Warner and Ryan Chiaverini, dedicated an entire hour to showcase the LGBTQ community on Friday, June 7. Special guests included Executive Editor of the Chicago Reader, Tracy Baim. Baim, who has spent 35 years in the LGBTQ media, will share insights into the historical significance of 50 years of pride following the Stonewall riots.

Cody LaGrow, producer and host at Newsy, joined Val, Ryan and on-air entertainment contributor Hank Mendheim, on set for host chat conversation about issues affecting the LGBTQ community. Mendheim, who serves both as a contributor and producer for Windy City LIVE, has been open on air about being gay.