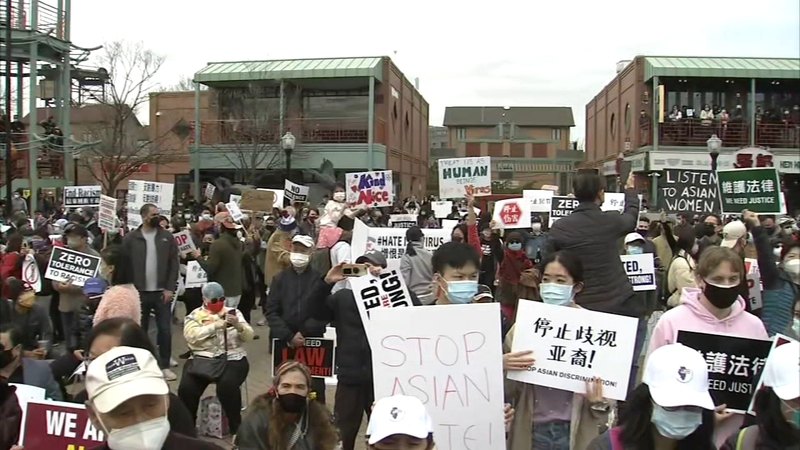 CHICAGO (WLS) -- In Chicago's Chinatown Saturday, hundreds joined groups across the country to denounce bigoted attacks against the Asian-American community.

"The misinformation about COVID being an Asian flu has only made the wall of ignorance thicker and heightened the attitude of distrust," said Chris Huang, Chinatown Security Foundation President.

"We know that hate rhetorics at the highest level, can lead to violence, and we've seen this throughout the country," said Paul Luu, CEO, Chinese American Service League.

VIDEO: Gunman walk into 1 of 3 spas before deadly Atlanta shootings

Luu said he sees the moment of solidarity as an opportunity to address challenges.

"Language barriers, trying to work and build trust with the police department, and simply understanding, what is a hate crime," said Luu. "We need to educate our community, that they have a voice."

Luu, like other have been galvanized by recent tragedies, including a mass shooting in Atlanta that left eight dead, six of whom were Asian women.

Now his organization is focused on connecting with Black and Latinx groups as well.
"We want to create more dialogue and build and strengthen our bridges between all the communities," said Luu.

Dozens marched more than a mile from Grant park to join the rally. The diverse crowd filled Chinatown Square and spilled into the balconies overhead.

"We are American also so don't hate us," said rallygoer Nick Bannapradist.

Bannapridst said he emigrated from Thailand decades ago only to see discrimination persist here.

"It's horrible. It's like we haven't made much progress in 60 years," said his daughter Ann Munoz.

Bannapridst's children and grandchildren joined him at the event with a simple message.

"Hate has no place in this world, no matter what color you are," Munoz said.

"This is a melting pot and everybody here, has the same opportunity. So everybody should be together," said Bannapridst.
Report a correction or typo
Related topics:
societyarlington heightsdes plaineselk grove villagehorner parkasian americanpeace marchrally
Copyright © 2021 WLS-TV. All Rights Reserved.
More Videos
From CNN Newsource affiliates
TOP STORIES