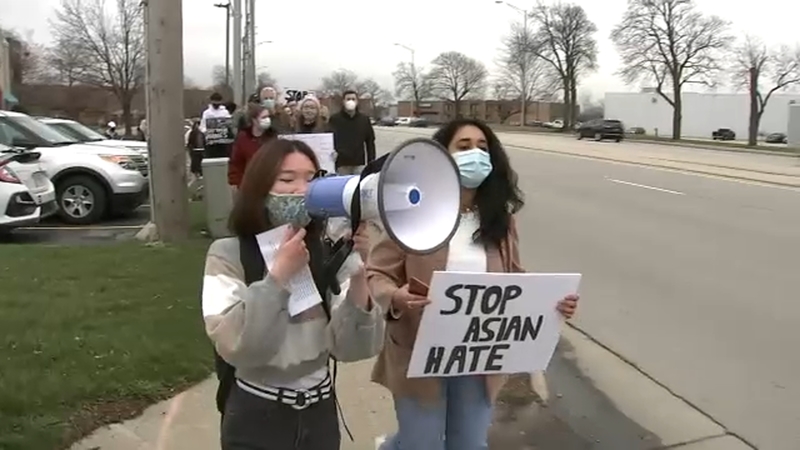 March, rally stands up against Asian discrimination in wake of Atlanta shootings

CHICAGO (WLS) -- The recent mass shooting in the Atlanta area that left eight people dead, including six Asian women, has sparked outrage across the country amid an increase in hate crimes targeting Asian Americans.

Two events in the Chicago area Friday, a march and a vigil, were organized in support of Asian Americans.

"What do we do? We stand up and fight back," said Kaylyn Ahn as she lead a group of marchers Friday in support of her local Asian community.

VIDEO: Gunman walk into 1 of 3 spas before deadly Atlanta shootings

Ahn is leading the charge. The Elk Grove High School senior and her classmate, Georgeena Mathai, organized a march for Asian lives in Arlington Heights.

"We hope this will send a message to our society and community that Asian Americans are not the ones to blame for this pandemic. There is no reason to harm or attack them," Mathai said.

While the march is in support of the Atlanta shooting victims, many participants said discrimination against the Asian community is something they have dealt with for years in silence.

"I think growing up Asian American in a mostly white neighborhood, like Des Plaines and Arlington Heights, it's difficult because you do experience isolation," Ahn said.

Ahn is not only bringing awareness to discrimination, but she said it's important to support Asian owned businesses. Ahn began and ended the march in front of her aunt's now closed grocery store.

Several organizations also came together in Chicago Friday to rally for Asian women, as well as mourn the loss of the Atlanta victims.

"l don't think any of us are telling our stories for the first time, but it's really being heard for the first time and I think that reality upsets me because it shouldn't have come to this," Sung Yeon Choimorrow with Asian Pacific American Women's Forum.

While both city and suburban events were attended by people of all cultures, Melanie Budrick took aim at her own race for not doing enough about racial discrimination

"It's not the job of people of color, it not the jobs of Black people, Asian people; it's my job, your job," Budrick said.