A-Rod, Joe Girardi talked about 1B 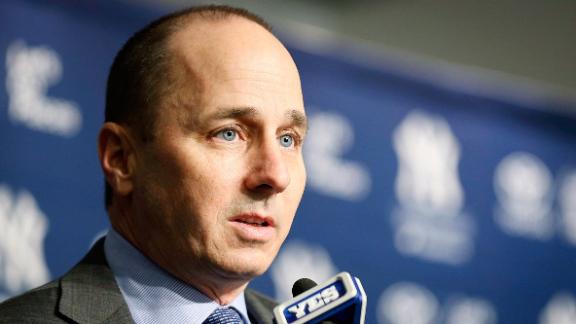 NEW YORK -- Alex Rodriguez will arrive at spring training with some new luggage -- a first base mitt.

New York Yankees manager Joe Girardi recently spoke to Rodriguez about picking up first base so he can be a backup to Mark Teixeira, according to general manager Brian Cashman.

Rodriguez, who will return next season from a one-year suspension, still is expected to primarily play third base and designated hitter.

Cashman also said he plans on having contingency plans at third in case Rodriguez -- who has had two hip surgeries -- can't stay on the field.

Rodriguez, 39, has three years and $61 million remaining on his contract. The Yankees are pretty certain he won't be the MVP-type player he once was, but hope he can help their offense, which only scored 633 runs in 2014.

"I know one thing, he's a great presence in the lineup when he's healthy," Cashman said. "And we look forward to good health and obviously production. But to assume anything right now on the front end, I can't do that."