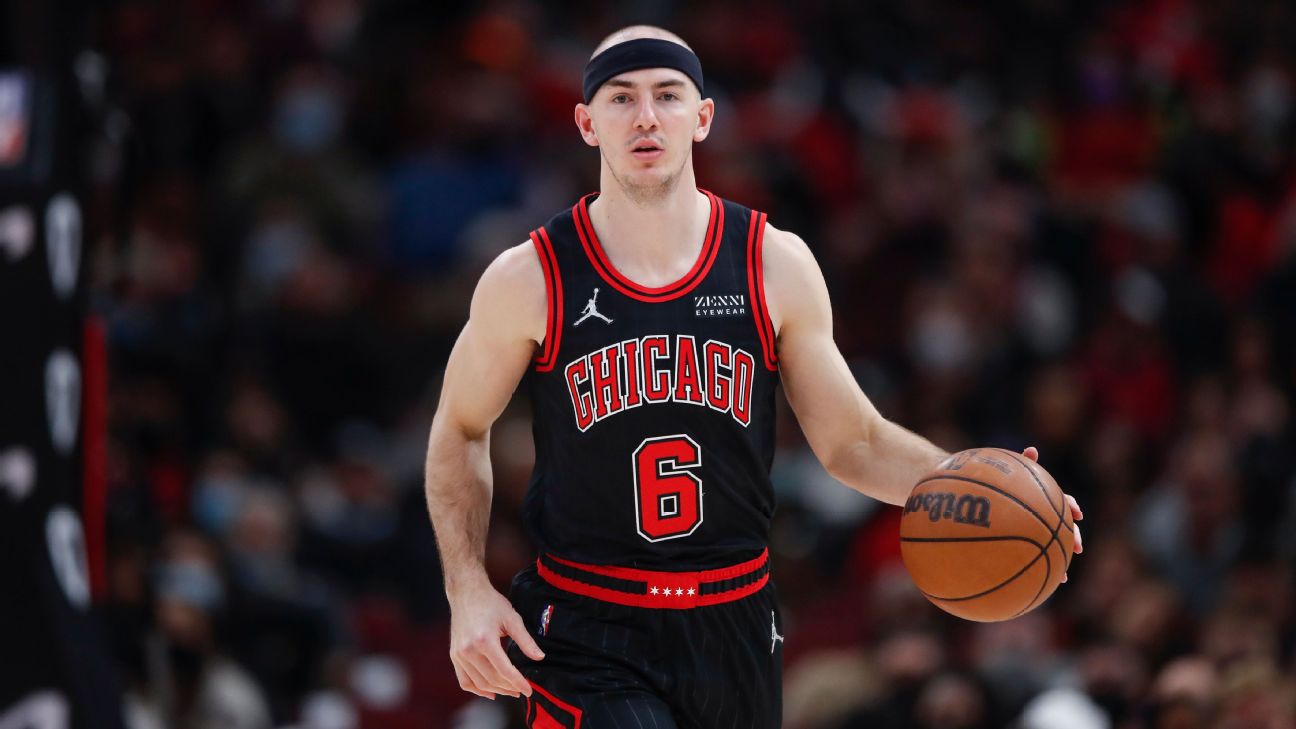 CHICAGO -- Chicago Bulls guard Alex Caruso had 11 points and four steals Saturday night in the team's101-91 win over the Cleveland Cavaliers, his first game back since breaking his left wrist Jan. 21.

Although Caruso returned to the lineup, the Bulls were playing without guard Zach LaVine, who missed the game because of left knee discomfort. LaVine has been managing discomfort in the knee since January, and it flared up again following the game Wednesday against the Detroit Pistons.


Caruso played 29 minutes as Bulls coach Billy Donovan aimed to manage his playing time, but Caruso admitted he felt "gassed" by the end of the fourth quarter, playing in just his third game since Dec.20.

"I was excited just to play basketball again," Caruso said after the game. "Caught myself just walking on the court for pregame warmups, just kind of smiling, excited to be out there. When the game started, I was standing up for random plays that probably didn't need to be cheered for. I was just excited to be back playing basketball."

Caruso's season has been interrupted several times this season -- by COVID-19, a foot injury and wrist surgery -- and Saturday was just his 29th game of the season.

And the Bulls were happy to have him back on the court again.

Forward Patrick Williams, who is still out with a wrist injury, donned a black No. 6 Caruso jersey on the sidelines. Javonte Green wore a white headband, like the one Caruso wears during games.


"We have great chemistry," Caruso said. "I think everybody on the team is pulling for whoever it is at the time that needs it, and tonight it was me. That's a product of how much I pour into my teammates, and they pour into me."

Chicago held Cleveland to 91 points, the first time the Bulls have kept an opponent to less than 100 since Caruso's last game, against the Milwaukee Bucks.

"There's a lot of confidence in that locker room with Alex defensively, what he can do and his disruption and the way he generates steals and deflections," Donovan said. "When we were whole, with him and Lonzo [Ball] back there, that was really the strength of our defense. We were disruptive."

The Bulls were still not completely whole, especially without LaVine, who they hope will be able to play Monday against the Sacramento Kings. However, Donovan said the team will manage LaVine's knee day to day for the rest of the season.


"The feeling was to see if we can get him back down to ground zero where he's feeling a little bit better," Donovan said before the game. "It's not one of these things where we've mapped out, this is what we're doing, we're sitting him here on his back-to-back. We're sitting him here. It's going to be day-to-day just to see how he's feeling."

LaVine missed his 11th game since injuring his knee in the first quarter of a game against the Golden State Warriors on Jan. 12. His MRI following the injury came back clean, and he saw a knee specialist in Los Angeles during the week before the All-Star break in February, when he received platelet-rich plasma therapy and a cortisone injection and had fluid drained from his left knee.