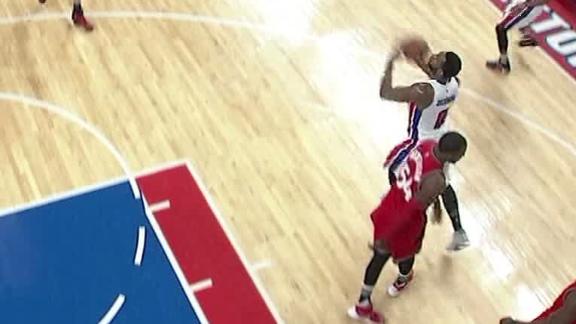 Detroit Pistons center Andre Drummond doesn't impress with his touch from the field.

Drummond, a 35-percent free throw shooter this season -- and even worse within 15 feet -- pushed the statistics to the margins Monday night in a loss to the Toronto Raptorsbynailing a 71-foot shot for the longest field goal in the NBA since a LeBron James basket in 2007.

When Drummond's shot dropped straight through the net to end the third quarter, Toronto's lead was down to five points, and it looked like the game might go down to the wire.

Instead, Kyle Lowry and the Raptors put it out of reach pretty quickly by starting the fourth quarter with a 3-point play and then going on an 11-2 run to pull away for the 103-89 victory.

"That shot could have gave them some momentum, but we had the ball coming up the court, and we had to be aggressive," Lowry said.