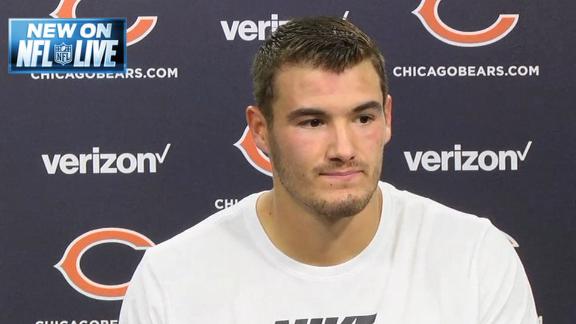 The Bears traded up to the No. 2 pick in the 2017 draft to select Trubisky, who impressed in the preseason by passing for 364 yards, 3 touchdowns and 0 interceptions for a 106.2 passer rating.

He will be the first quarterback to make his first career start on Monday night since 2012, when Colin Kaepernick started for the San Francisco 49ers in a 32-7 victory against the Bears in Week 11.

Trubisky said he is confident he can handle the spotlight.

"So my job is to just study the game plan and, once I get in there, just go back to my instincts, play the game I know how to play. I've been playing this game for a long time, so I'm going to go in there and be myself, and the pressure shouldn't be anything what everyone else makes it out to be. So I'll just go out there and try to have fun."

Trubisky won the No. 2 quarterback job over Mark Sanchez following the preseason, but the rookie took limited first-team reps in practice prior to Tuesday.

Mike Glennon, who started the first four games of the season and was informed by Bears coach John Fox of the change Sunday night, said Trubisky is up for the challenge.

"I think he's a very talented player" Glennon said. "Obviously, the way you really improve is game experience. That's what he'll get now. I'm sure there's going to be some ups and downs, because it is an adjustment playing in a real NFL game. But he's definitely a talented player that I think has a bright future in the NFL."

Turnovers proved to be Glennon's undoing. The veteran quarterback coughed up the football eight times in four weeks, prompting Fox to make the switch.

The Bears (1-3) are looking for Trubisky to take better care of the football, but they also want him to make plays with his athleticism. Trubisky displayed a knack in the preseason for rolling outside the pocket and pushing the ball downfield.

"With him being mobile, obviously there will be a lot of scramble plays, a lot more scramble plays than we had with Mike," Bears wide receiver Markus Wheaton said. "That could mean more opportunity for us to make big plays."

However, wide receiver Josh Bellamy admitted that he isn't entirely sure what to expect from Trubisky, who only started 13 career games in college.

"Everybody got their different styles of play," Bellamy said. "We gotta see Monday. Nobody knows what's going to happen. You can't predict it. Can't wait to see Monday."

Trubisky feels like he is ready for his MNF start
Bears rookie QB Mitchell Trubisky believes pressure only appears when you aren't prepared, therefore he is going to be ready when he steps out on the field on Monday against the Vikings.
Report a correction or typo
Related topics:
sportsespnmarkus wheatonjohn foxmnfmark sanchezmitch trubiskynflchicago bearsmitchell trubiskyrookiemonday night footballjosh bellamy
Copyright © 2020 ESPN Internet Ventures. All rights reserved.
More Videos
From CNN Newsource affiliates
TOP STORIES