Ben Roethlisberger: 'Not the same' playing Patriots without Tom Brady 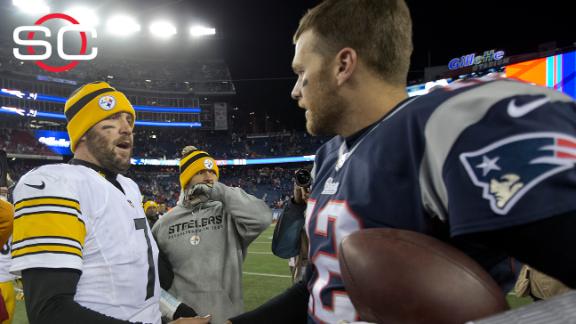 PITTSBURGH -- The Patriots-Steelers matchup in Week 1 would be better off with Tom Brady involved, quarterback Ben Roethlisberger said at Tuesday's session of organized team activities.

Roethlisberger, whose Steelers have faced New England eight times since he was drafted in 2004, jokingly asked if everyone's sure Brady won't be in the lineup, a nod to Brady's looming appeal of his four-game suspension for his role in the Deflategate controversy.

"He's a guy, I've said for a long time, he's the best in the business, and he proved it again last year winning his fourth [Super Bowl]," Roethlisberger said. "If he's not out there, it's not the same. I have a lot of respect for him on the football field and some of the unbelievable things that he's done. I guess we'll wait and see what's finally going to happen."

The league has not yet heard Brady's appeal, which the NFLPA filed for Brady on May 14, three days after the league issued the suspension.

The Sept. 10 game will lack its usual star power as Pittsburgh running back Le'Veon Bell is set to miss three games for marijuana use, as well.

The Steelers are months away from preparing for New England's offense, which helps explain why Brady's backup, Jimmy Garoppolo, isn't a household name in the Steelers' facility.

Garoppolo was a second-round pick in 2014 who completed 19 of 27 passes for 182 yards and a score in relief of Brady last season.

"If it's a new quarterback, who is it, what's his name, Gappo?" outside linebacker Arthur Moats said. "Either way, you definitely want to confuse them. That's the goal for any quarterback you play against."

"I don't care," running back DeAngelo Williams said. "It's not my team. I don't play against Tom Brady anyway. I play against the defense."

Outside linebacker James Harrison said he was here to discuss Steelers OTAs, not the Patriots.

Steelers' thoughts on Brady-less Patriots
ESPN reporter Jeremy Fowler discusses what several Steelers had to say about the prospect of facing the Patriots in September without Tom Brady at New England's helm.