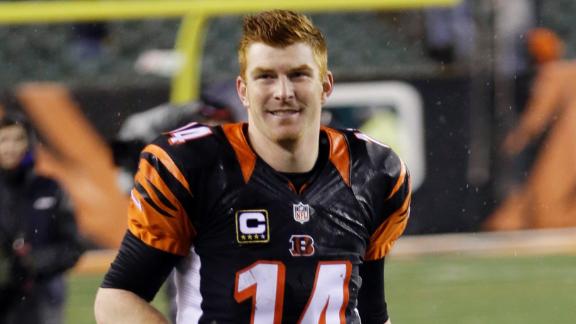 ESPN
By Coley Harvey
PITTSBURGH -- The Cincinnati Bengals are fed up with the flu.

After eight players dealt with the illness in the days leading up to Sunday night's game against the Pittsburgh Steelers at Heinz Field, some Bengals wore masks on their short flight from Cincinnati on Saturday afternoon, according to ESPN's Bob Holtzman. They did so in hopes of preventing the germs from spreading while team personnel were together inside the plane's tight quarters.

Quarterback Andy Dalton was perhaps the biggest name to get the flu this week, forced to miss Wednesday's practice because of it. He ended up practicing in a full capacity Thursday and Friday. It was on Friday that he told ESPN he was close to "100 percent" and would be fine to play this important division game.

Sunday night's regular-season finale is a de facto division title game with the winner subsequently claiming the AFC North championship. A win also will be the difference between the No. 3 AFC playoff seed and the No. 5 seeding for the two teams that clinched postseason spots last weekend. The loser would be the No. 5, likely heading on the road to face Indianapolis next week. The winner would be the No. 3 and host the No. 6 seed in the wild-card round of the playoffs.

The Bengals still have an outside shot at claiming the No. 2 seed, too, if (in addition to them winning), Denver loses Sunday afternoon to Oakland. If they get the No. 2 seed, they will have a first-round bye before hosting a divisional-round game.

There are plenty of reasons Cincinnati needs to be as healthy as possible for this game. Four players were listed as questionable on Friday's injury report due to the flu, including cornerback and return specialist Adam Jones, who missed that day's practice.

With fellow cornerback Terence Newman out sick all week, backup corner Dre Kirkpatrick, who intercepted Peyton Manning twice in the last three minutes of Monday's win over the Broncos, likely will see his share of action Sunday.