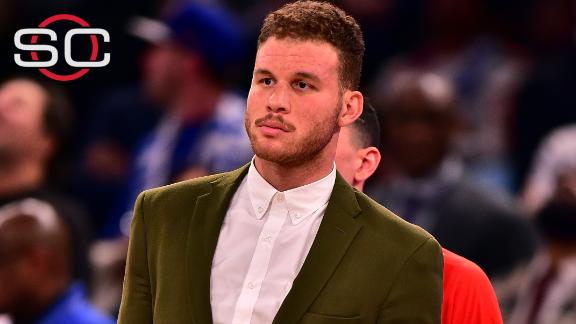 According to the sources, Griffin and Matias Testi, the team's assistant equipment manager, got into an argument in a restaurant during the team's trip to Toronto. Griffin hit Testi, who then left the restaurant and went outside. Griffin followed him outside and hit him again.

Griffin suffered a suspected fracture in his hand in the incident, sources told ESPN's Marc Stein and Ramona Shelburne early Tuesday morning.Sources said the injury is expected to keep Griffin out "a matter of weeks, as opposed to days."

Testi had visible injuries to his face, sources told Eaves. Both Griffin and Testi were sent home after the incident.

Toronto police say they have no record of a police report under Griffin's name and are not investigating the incident. The restaurant where the incident occurred was crowded, so there are expected to be multiple witnesses to the incident, a source told Shelburne.

Griffin and teammate DeAndre Jordan are good friends with Testi, according to sources.Griffin, in fact, has vacationed with him.

Clippers coach Doc Rivers said at practice Tuesday morning that the team would issue a statement on the situation before its game against thePacerson Tuesday night.

A source told Shelburne that the NBA is investigating the incident and Griffin could face league discipline.

L.A. travels toAtlantato face the Hawks on Wednesday before returning home to square off with the Lakers on Friday at Staples Center.

Griffin, who has been out with a quadriceps injury, originally hoped to return to the lineup during this road trip. The Clippers have gone 11-3 in his absence.

In November 2014, Griffin was charged with one count of misdemeanor battery after allegedly getting into an altercation with a man at a Las Vegas nightclub.According to reports at the time of the incident, Griffin was upset by camera flashes in his face and grabbed the man's phone. Prosecutors dropped the case in March of last year, saying they couldn't prove the allegations.