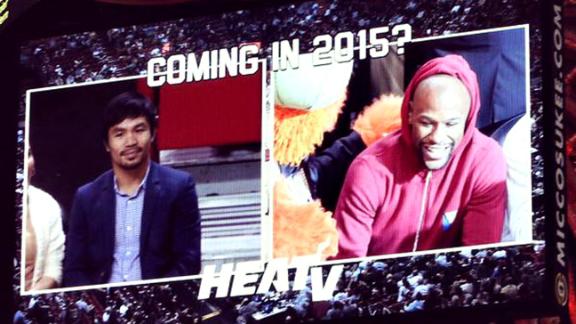 The megafight that the boxing world has been clamoring for between Manny Pacquiao and Floyd Mayweather Jr. should be finalized in "the next couple days," Top Rank promoter Bob Arum told the New York Post.

The sides have been negotiating what will certainly be the richest fight in boxing history, but no deal has been struck yet. The two fighters met privately for more than an hour on Tuesday in Miami.

"Everybody is doing the right thing," Arum told the Post on Friday. "We're looking to complete the paperwork. Everything is moving in the right direction. Hopefully, the next couple of days it will get done."

One of the issues is that Time Warner/HBO, which has a contract with Pacquiao, and CBS/Showtime, which has Mayweather under contract, need to hammer out terms for a joint pay-per-view telecast, which they did once before for the 2002 fight between then-heavyweight world champion Lennox Lewis and former champ Mike Tyson. They have been negotiating the terms.

"I think it helped a lot because we were all putting papers together, and there was still a question as to whether Floyd really wanted to do the fight or not," Arum told the Post of the Miami meeting. "Based on the meeting with Pacquiao in the hotel suite, Manny and [Pacquiao adviser] Michael Koncz were convinced Floyd absolutely wants to do the fight."

Pacquiao (57-5-2, 38 KOs), the 36-year-old Filipino legend, and Arum have repeatedly said they have agreed to all of the terms outlined by Mayweather (47-0, 26 KOs), who turns 38 in February, during talks with CBS CEO Leslie Moonves, who has served as the go-between on behalf of Mayweather and his adviser, Al Haymon.

Mayweather has said he intends to fight May 2 at the MGM Grand in Las Vegas, be it against Pacquiao or somebody else.