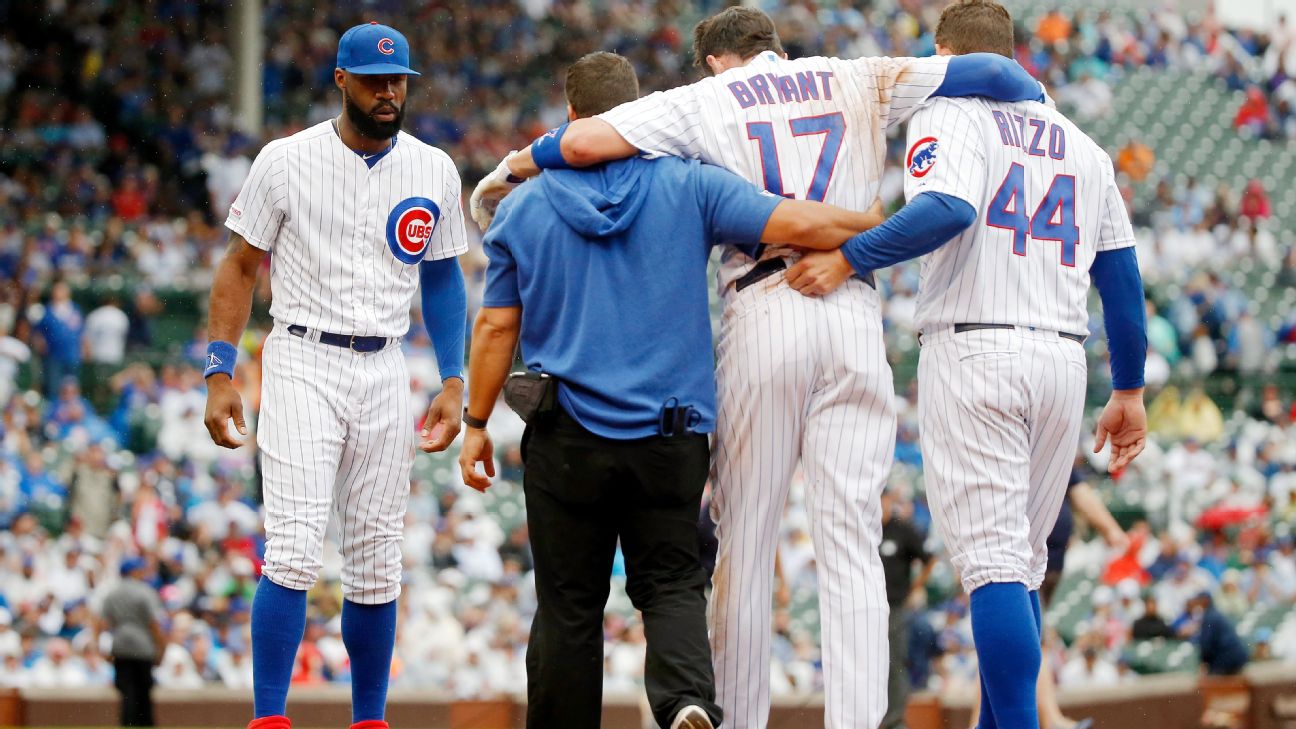 ESPN
The Chicago Cubs enter the final week of the regular season still holding out hope that they can chase down an NL wild-card spot but knowing they likely will have to do it without slugger Kris Bryant.

Bryant's agent, Scott Boras, said he wishes that weren't the case and believes Major League Baseball is to blame.

Bryant sprained his right ankle after landing awkwardly on a wet first-base bag while trying to beat a double play against the Cardinals on Sunday at Wrigley Field. An MRI on Monday revealed a Grade 2 sprain, a source told ESPN's Jesse Rogers, putting the third baseman's availability for the Cubs' final six games in doubt.

Boras, in comments to the Chicago Sun-Times, questioned why major league officials haven't done more to ensure player safety. Another of his clients, Bryce Harper, suffered a significant bone bruise and hyperextended knee when he slipped on a wet base while with the Nationals in August 2017.

"What have they done since Harper? The answer is nothing," Boras told the Sun-Times. "They're focused on other factors, economic factors, all things relating to how they can administer the game, and yet the safety of players and resolution of this issue has gone without any attention.

"The integrity of our game is going to [be] damaged when the safety of players is not at the forefront, and Major League Baseball has dropped the ball on the wet bag subject."

Bryant echoed his agent's assessment about the importance of ensuring player safety in rainy weather.

"I'm sure there's a solution to it," he said Tuesday. "What can we do? Learn from it and make it better going forward."

When Harper was hurt in 2017, Boras implored MLB to take steps to ensure that wet, slick bases weren't a safety hazard to players. In his eyes, those steps haven't been taken.

An MLB spokesperson told the Sun-Times that the league has discussed the topic but has yet to find an adequate solution.

"To date, no one has come up with a bag that has proven to be better safety-wise than the bag we use now," the spokesperson told the newspaper.

Bryant, the 2016 NL MVP, is hitting .282 with 31 home runs and 77 RBIs. The Cubs are expected to have an official announcement on his status ahead of Tuesday's series opener against the Pirates in Pittsburgh. Bryant is traveling with the team, a source told Rogers, but if,as expected, he's unable to play, it's a significant blow to a team four games back in the wild-card race entering Monday.

"The issue for me is they've done nothing," Boras told the Sun-Times, referring to MLB. "They have completely skirted this issue. They had an MVP player having an MVP season dramatically get hurt and miss time. It affects playoff races and the entire safety of players and the integrity of the game. When they are very diligent to get umpires and teams to play during rain, during precipitation, trying to get the games played.

"There's been no discussion, no resolution, absolutely nothing done in this area, except the player is to bear the burden of slippery and wet bags."
Report a correction or typo
Related topics:
sportsespnmlbkris bryantchicago cubs
Copyright © 2020 ESPN Internet Ventures. All rights reserved.
More Videos
From CNN Newsource affiliates
TOP STORIES