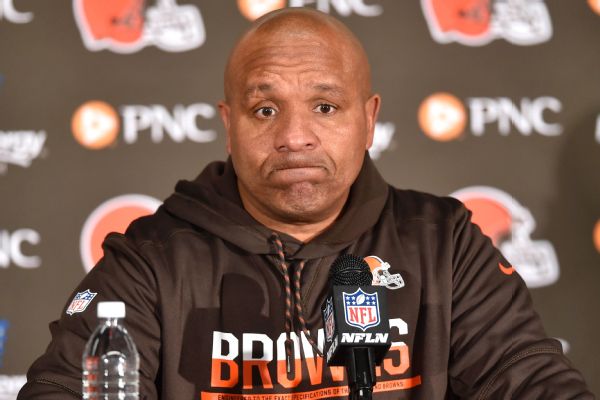 ESPN
By Pat McManamon
BEREA, Ohio -- Coach Hue Jackson made one guarantee in the Cleveland Browns' season wrapup on Monday.

Jackson spoke the day after his team finished a 1-15 season, the worst record in team history. The Browns' only win came against San Diego on Christmas Eve.

Cleveland opened the season with 14 straight losses; at one point, Jackson almost broke down as he called losing so frequently "the toughest thing ever." When the possibility of a similar season in 2017 was brought up, he cut off the question.

"I'm not going 1-15," Jackson said. "No. I'll be swimming in that lake over there somewhere. That's not happening."

Presumably he was referring to the nearby Lake Erie.

"That's not happening," Jackson said. "I just know me too well."