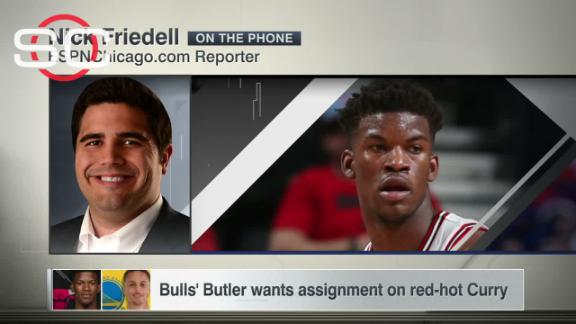 SAN FRANCISCO -- Jimmy Butler welcomes the challenge of defending the hottest player in the NBA, Stephen Curry, on Friday night in Oakland.

As a matter of fact, Butler plans to ask Chicago Bulls coach Fred Hoiberg for the assignment.

"I look forward to guarding everybody in this league, especially a prime-time scorer like him," Butler said after Wednesday's win over the Phoenix Suns. "So I'll ask Coach for that matchup. No disrespect to him, but I like that."

With Derrick Rose out with a sprained left ankle and Aaron Brooks out with a left hamstring injury, the Bulls might not have much choice other than to put Butler on Curry for much of the game. Kirk Hinrich, who scored a season-high 14 points against the Suns on Wednesday, is expected to get the start at the point for Rose but is still on a minutes limit of around 20 as he recovers from a toe injury. E'Twaun Moore will be backing him up.

Together they will have to find a way to slow Curry, who is coming off another huge performance on Thursday night, totaling 40 points, 11 rebounds, four assists and three steals in a 124-117 win over the Los Angeles Clippers. Curry comes into Friday night's game averaging a league-leading 34.2 points a game.

"He's putting on an absolute show right now," Hoiberg said recently. "It's fun to watch, but it's scary to watch when you know you've got him coming up soon. What he's doing right now, he's throwing in shots from a step over half court when he's trying to draw a foul. It's been unbelievable. You could make the argument he's the best shooter of all time. He's certainly living up to that right now."

Hoiberg said he isn't sure exactly how much Butler will be matched up on Curry. The bigger question for Hoiberg is, after Butler scored 32 points in 43 minutes on Wednesday night, is it fair to ask him to try to score 30 points while getting at least a few defensive rotations on Curry?

"[Butler's] going to spend some time on him, there's no doubt about that," Hoiberg said. "But other guys are going to have to step up to that challenge as well. Jimmy played almost 43 minutes [Wednesday] night. At the end of the game I tried to run a play for him [and] he said, 'I can't,' and that was with about two minutes left. I think that's when Hinrich hit the big shot. So yeah, he's going to have obviously a big stretch on Steph, but so are some other guys as well."

Still, Hoiberg is going to have to lean on Butler to do even more without Rose on the floor. It's a challenge Hoiberg believes Butler is ready for.

"I think the biggest thing is he wants [the challenge]," Hoiberg said after Friday's shootaround. "He wants that pressure on him. He wants to guard the other team's best player, and he wants to be the guy making plays at the end of the game. So I think that's a big thing, he wants that responsibility."

Rose said he knows it's a lot to ask of Butler to have him covering Curry while also looking to score 25-30 points.

"It's hard," Rose said. "But I think Jimmy is up for the challenge. The way he came in today it seemed like he was focused. It's part of our profession, too. You got to be willing to take challenges in your own little way. And it's not only a Jimmy thing. Guarding them is a team effort, and scoring is a team effort when you're playing against them."

Even with the confidence in Butler's ability, the Bulls understand that it will be tough to slow Curry down.

"He's been amazing, man," Rose said. "He's playing great basketball. If anything, he pushes, I think not only me, but the whole league to work on their game. The way he's been working out, the way he's focused and how consistent he's been playing, I think he's pushing the entire league.''