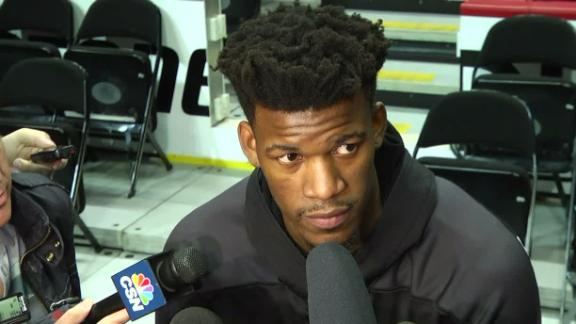 CHICAGO --Bullspoint guard Rajon Rondo suffered a fractured right thumb in Game 2 against the Boston Celtics and will be out indefinitely, the team announced Friday.

Bulls coach Fred Hoiberg said Rondo will be re-evaluated in seven to 10 days and is wearing a cast,but part of the reason for that is Rondo has been dealing with a wrist injury that caused him to miss three games in the final week of the regular season.

The Bulls said Rondo's injury will not require surgery, but a source told ESPN's Chris Haynes that the injury was "pretty serious" and his possible return depends on how long the Bulls can extend their postseason run.

"We're going to miss him," Bulls All-Star swingman Jimmy Butler said after Friday's shootaround. "The pace that he sets for the team, the leadership that he brings, and the way that he plays. We've still got to go out there. We're expected to win. We know what we're capable of.

"I guess we're doing this for him now."

Second-year point guardJerian Grant will start in Rondo's place for Game 3 on Friday night in Chicago, withMichael Carter-Williamsserving as Grant's backup. The Bulls have a 2-0 lead in the best-of-seven series against the top-seeded Celtics.

Hoiberg said the injury occurred during third quarter of Game 2 on Wednesday after Rondo was swiping for the ball and hit the elbow of Celtics big man Kelly Olynyk.

"Rondo's obviously been unbelievable in the two wins that we had in Boston," Hoiberg said. "So to get the news that we got last night was obviously very difficult. At the same time, the guys are going to get an opportunity to play more. It's what you work for. It's why you put so much extra time in the gym is for this opportunity ... everybody's going to have to be ready to pick up for what Rondo gives us.

"We can't change the way we're approaching things right now because one of our star players is out. We need to pick up for what he gives us, and I'm confident our guys will do that."

Without Rondo in the lineup, Butler understands that he will be expected to run more of the offense.

"If I've done it this season, I've got to be pretty comfortable with it," Butler said. "I've done it a lot. I'll be all right, man. It's not about me. We've got young guys that are stepping in, we've got to make sure that they're comfortable.

"I've played enough minutes to where I'll be OK. We want Jerian and Cam [Cameron Payne] and whoever else may play to know that it's OK to go out there and hoop, man. Play basketball. This is the reason that you're here, to hoop. It's the playoffs. This is what you wake up for every day."

Rondo was playing his best basketball of the season after being reinserted into the starting lineup in a March 13 victory against the Charlotte Hornets.

He was averaging 11.5 points and 10 assists over the first two games of this series. In Game 2, Rondo had 11 points, 14 assists, 9 rebounds and 5 steals -- just one rebound shy ofbecoming the team's first player since Scottie Pippen (1997) to get a postseason triple-double.

Butler confident Bulls can win without Rondo
Bulls swingman Jimmy Butler continues to believe his team can win despite losing Rajon Rondo to a fractured thumb.