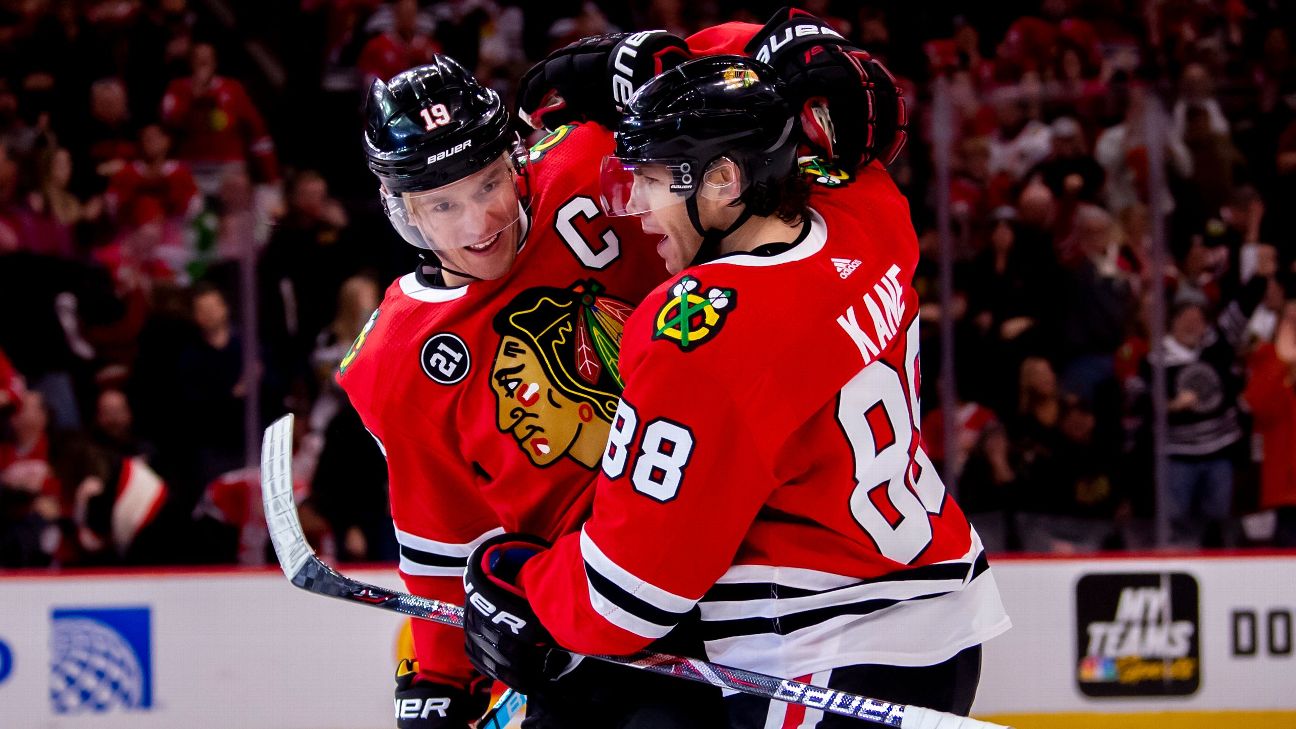 The core remains from the Chicago Blackhawks' dynastic years. Do they have another big run left in them, and if so, what pieces must be added by general manager Stan Bowman?Here's everything you need to know about the Blackhawks heading into the 2019-20 NHL season:

The big question: Did the team do enough to improve the blue line?

It's no secret that defense was an issue for the Blackhawks, who allowed 3.55 goals per game, second worst in the league, and missed the playoffs for the second straight year. (They also endured massive change, moving on from the legendary Joel Quenneville to rookie head coach Jeremy Colliton early in the season.) Bowman, constantly strapped by the salary cap, made a few tweaks to make the blue line better, including trading for Calvin de Haan (Carolina) and Olli Maatta (Pittsburgh). The real issue is that the Blackhawks are overcrowded and need to eventually pave the way for bright young prospects like Adam Boqvist and Ian Mitchell.

The Blackhawks made a major upgrade at the backup goaltending spot. Bowman says he was looking for a veteran to sign on a one-year deal -- to replace the retiring Cam Ward, whom the team was not going to re-sign -- and was surprised to find 2019 Vezina Trophy finalist Robin Lehner available. He'll add insurance and push Corey Crawford, who is in the final year of his deal.

Maatta and De Haan were the blue-line additions, and the team reacquired Andrew Shaw and also Zack Smith for the bottom of the lineup. Chicago also took a flier on Alexander Nylander. Most of these deals were done in trades. The trade casualties: Artem Anisimov, Dominik Kahun, Henri Jokiharju and Gustav Forsling.

Chris Kunitz retired, as did Ward. The Blackhawks have about $2.5 million in projected cap space.

Dylan Strome gets 75 points. Things have been trending up for the No. 3 overall pick of the 2015 draft ever since he was acquired from Arizona last season and reunited with junior teammate and good buddyAlex DeBrincat. Strome averaged 0.88 points per game in 58 games with the Blackhawks, a huge uptick from the 0.30 he was averaging in his first 20 games with the Yotes. Strome could earn himself a big payday with Chicago; he's a restricted free agent this summer.

The eighth overall pick of the 2016 draft hasn't delivered much in the NHL. That facilitated a trade to Chicago -- surprisingly for Jokiharju, one of the Blackhawks' most promising prospects. Nylander -- who has only 19 games of NHL experience thus far -- has a ton to prove. He has looked great in training camp and should get opportunities on one of Chicago's top two lines.

Elite scoring options. No matter what the forward group looks like, the Blackhawks know they have two high-end scorers on their roster: Patrick Kane, who is still putting up monster production, and DeBrincat, who quietly hit 41 goals last season and has now proven he can score at any level.

The blue line. Despite the additions, this is still a concern. Brent Seabrook isn't as much of a liability as some fans make him out to be, but he doesn't inspire a ton of confidence either. The Blackhawks should be improved from last season, but it's hard to say it will be by much.

The aging veteran core plagued the FPR figure in two areas: the NHL roster (No. 21) and cap/contracts (No. 28). On the bright side, the prospects were No. 10, according to our panelists, and the owner/GM/coach finished No. 19, partially owing to Colliton's inexperience.

Shaw sports sneaky fantasy upside as a potential linemate to DeBrincat -- second only to teammate Kane in fantasy value -- and center Strome. Strome and DeBrincat, former teammates with the OHL Erie Otters, lit it up once reunited late last November; DeBrincat scored 41 total goals on the season. Whoever slides in on that forward pair's right side is bound to tangibly benefit. In the early stages, it appears to be Shaw.

Until Boqvist is NHL-ready, Erik Gustafsson skates alone as Chicago's top fantasy defenseman in playing the point on the club's No. 1 power play. Gustafsson erupted for 60 points in 2018-19, including 17 goals. The 27-year-old should close in on that tally again this season, although we don't expect that many goals.

Crawford insists he feels 100% after losing most of the previous two seasons to groin- and concussion-related issues. Lehner is inspired to prove he's more than a flash-in-the-pan renaissance season with the Islanders. It all adds up to one competitive tandem operation in net, undoubtedly to the Blackhawks' advantage, and less so to fantasy managers keen on a 60-game workhorse. -- Victoria Matiash
Report a correction or typo
Related topics:
sportsespnchicago blackhawksnhljonathan toewsduncan keithnhl previewpatrick kane
Copyright © 2020 ESPN Internet Ventures. All rights reserved.
More Videos
From CNN Newsource affiliates
TOP STORIES