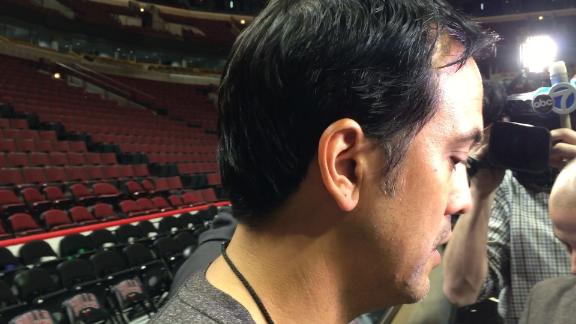 MIAMI -- Chris Bosh returned to the Miami Heat bench on Monday night, his first appearance since being sidelined by an unspecified injury last month.

Bosh was dressed in a gray sport coat and took a seat toward the end of the bench for Miami's 124-119 victory against the Denver Nuggets. It was Bosh's first time being seen at AmericanAirlines Arena since Feb. 9, Miami's last home game before the All-Star break.

"It's awesome having him around," Heat coach Erik Spoelstra said after the game. "I love Chris. I love having him around. He always has an intuitive feel of what I'm thinking, what needs to be relayed. He's an example of leadership at all levels.

"This is the first one he was out here; normally he watches from the back. Even before the game, he was going through the scout [film] before our [pregame] meeting."

It remains uncertain whether the 13-year veteran will return to play this season.

"It was cool to see him back out there," teammate Dwyane Wade said. "We didn't know he was coming out until he came out. It was a surprise for everybody. We trust his IQ, so when he comes to the bench, he's telling us some of the things he sees."

Bosh, who withdrew from the All-Star festivities in Toronto because of what originally was called a calf strain, issued a statement last week through his public relations firm saying he does not have deep vein thrombosis and that he isworking with the Heat to explore precautionary treatment options and "taking every necessary step" to make sure he remains free of the condition moving forward.

This is the second time in as many years that Bosh's season has been interrupted by a health scare. Last season, Bosh missed Miami's final 30 games to treat a blood clot that had traveled from his calf to his lung and led to his dealing with severe pain and being hospitalized for several days.

The Heat (39-28) are fourth in the Eastern Conference standings -- just a half-game behindBostonfor No. 3 -- with 15 regular-season games remaining. Miami has won 10 of 13 games since losing Bosh at the All-Star break.

"It's great to have him back," said Heat co-captainUdonis Haslem, who sat next to Bosh for most of the game. "Obviously, it's not basketball. But when it comes to your health, there's a lot of things more important than basketball. I'm just glad to see him back and in good spirits.

"To have his presence and words of wisdom, just to hear his voice over there, it was great. When he speaks, everybody listens because he doesn't speak too often. So when it's coming from C.B., it's coming from a guy with experience, intelligence. Everything he's telling you to do, it's something he'd be out there doing himself."

ESPN Staff Writer Michael Wallace and The Associated Press contributed to this report.