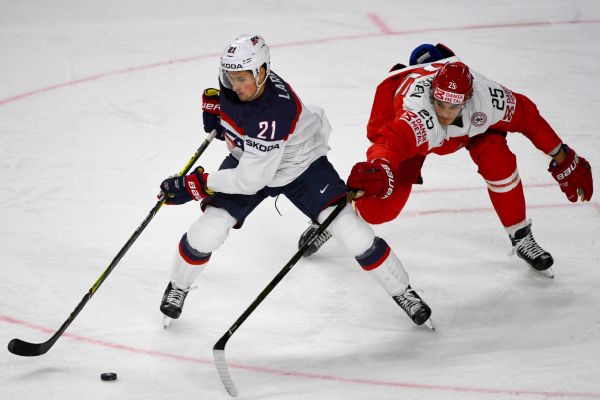 COLOGNE, Germany -- The United States bounced back from its surprise opening loss at the ice hockey world championship with a 7-2 rout of Denmark on Sunday, thanks to a hat trick from the Arizona Coyotes' Clayton Keller in the Group A game.

France defeated Finland for the first time, in a Group B match in Paris which was followed by an inspiring gesture. Pierre-Edouard Bellemare was named France's player of the game but insisted goaltender Florian Hardy take the award instead after Finland outshot the home side 43-26.

The U.S. got its first win after Friday's 2-1 loss to Germany with a standout performance by left wing Keller, the youngest player on the American roster, and Connor Hellebuyck stopping 23 shots in Cologne.

Anders Lee of the New York Islanders scored twice, opening the scoring on a power play. The 18-year-old Keller got off the mark when it was four on four before Morten Madsen pulled one back for the Danes on a power play.

Nikolaj Ehlers was serving a 10-minute penalty when Johnny Gaudreau of the Calgary Flames scored before the end of the first period. Nichlas Hardt got one back at the start of the second but the U.S. replied with goals from Keller, Lee and Brock Nelson.

Keller capped his fine display by wrapping it up in the third quarter with the aid of a deflection.

"It's always cool to score goals. That's what everybody wants to do. My line-mates made some great plays and I was fortunate to be able to put them in," Keller said.

The U.S. won the last of its two titles back in 1960 but took bronze two years ago.

Co-host France finally beat Finland, delighting the home crowd in Paris with a 5-1 upset victory thanks to an inspirational performance from Hardy.

Bellemare was named France's player of the game before insisting it went to Hardy.

Antoine Roussel scored two goals, Bellemare had a goal and an assist, and the other French goals were scored by Valentin Claireaux and Damien Fleury. Mikko Lehtonen was the only Finnish player to beat Hardy.

"Our goalie was outstanding today, and that was the difference," defenseman Kevin Hecquefeuille said afterward.

The tournament is being co-hosted by France and Germany, with the top four teams from each group going through to the quarterfinals.

Center Vladislav Namestnikov and left winger Artemi Panarin had two goals and two assists each, while left winger Sergei Andronov scored twice in Russia's 10-1 win over Italy in Cologne. The speed and precision of Russia's passing simply overwhelmed Italy. Center Nate Mackinnon, a 21-year-old rising star for the Colorado Avalanche in the NHL, had a hat trick and an assist as Canada routed Slovenia 7-2 in Paris.

Defenseman Tyson Barrie -- his Avalanche teammate -- had a goal and three assists, including on two of Mackinnon's goals. Forwards Mitch Marner, Brayden Point and Jeff Skinner had a goal each for Canada, which is looking to equal Russia's tally of 27 world titles -- 22 of those as the Soviet Union.

Slovenia was missing forward Ziga Jeglic as he sat out the first of a two-game suspension for a kicking violation against Switzerland on Saturday.

Russia tops Group A in Cologne and Canada leads Group B in Paris.

Both won their openers, with the Canadians beating 2010 winner Czech Republic 4-1 and Russia scraping past Sweden 2-1 in a shootout.