Cubs fans keep betting slips as mementos instead of cashing 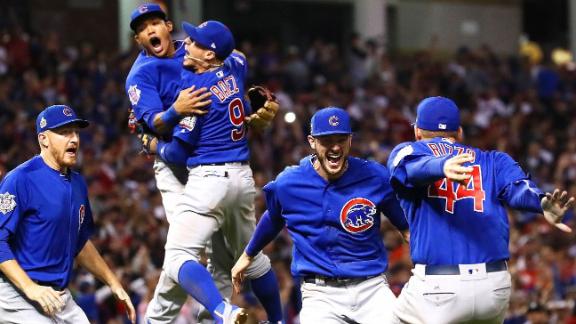 This spring, Las Vegas sportsbooks were treated to unexpected windfalls so unusually large, managers felt the need to recheck the numbers to figure out the reason behind the surplus.

The cause? Uncashed Chicago Cubs World Series bets from last season. Thousands of them.

For the Lovable Losers from Chicago, 2016 was finally their year: The Cubs won the World Series. Lifelong Cubs fans celebrated the end of a 108-year drought, saving mementos along the way. They kept things like ticket stubs, souvenirs from Wrigley Field and even betting slips.

Betting on the Cubs has been a Las Vegas tradition that casinos have enjoyed for decades. In fact, there was a running joke among bookmakers about the number of hotels that were paid for by bets on the Cubs to win the World Series. Things didn't change last year -- except that the Cubs finally won the whole thing.

In May, when the 180-day deadline to turn in the bets passed, more than 30 percent of the tickets on the Cubs had not been cashed.

"When we saw the number, we were just all extremely surprised at how big it was," said Jason Simbal, vice president of risk management for CG Technology. "We went back and had to check like three times to make sure there was no mistake."

The vast majority of the uncashed bets on the Cubs were small in size and placed over the counter at Strip casinos, signs that tourists were involved. The average amount of the uncashed Cubs bets at CG Technology properties was only $26. However, with most bets placed at odds around 4-1, the uncashed tickets saved the book more than $100,000 in payouts.

At the Golden Nugget in downtown Las Vegas, slightly more than 20 percent of Cubs World Series bets have gone uncashed, including a pair of $600 bets at 5-1 that would pay $3,600 each -- pricy souvenirs, if that is indeed why the winnings haven't been collected.

The expiration deadlines for tickets vary from book to book. Six months or 180 days after the event is common. Multiple bookmakers said they'll often let guests slide a little on the deadline in an effort to provide good customer service.

Some customers at the Golden Nugget asked whether they could keep their Cubs ticket after cashing it.

"Unfortunately, we can't do that because of gaming regulations," Kessler said. "But we'll be happy to make a copy of it for them."

"Between ticket stubs, W towels, a lucky penny I picked up when I landed in Cleveland for Game 6 and the winning bet from Vegas, I'm gonna do something really cool with all the mementos," Glickman said on social media. "I'm not cashing it."

The bets on the Cubs haven't stopped this season, either, despite the team's disappointing first half. More bets have been placed on the Cubs to win the World Series than any other team at CG Technology, Simbal said.