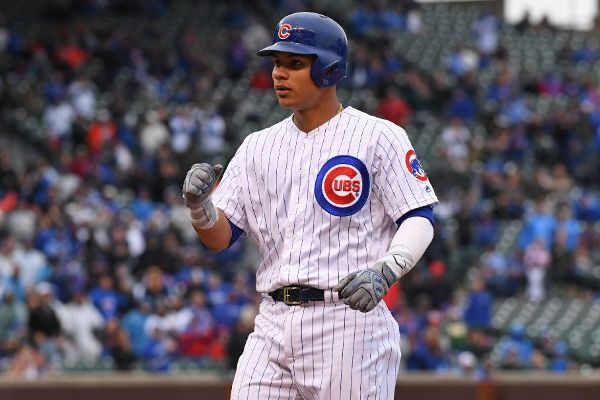 SAN FRANCISCO -- Chicago Cubs catcher Willson Contreras will have an MRI on his right hamstring Thursday after the team arrives in Phoenix for a weekend series.

Contreras, 25, was injured running out a ground ball in the eighth inning of Wednesday's 3-1 loss to the San Francisco Giants, creating a huge void in the middle of the Cubs' lineup as well as behind the plate. He was the hottest offensive player on the team when he went down.

"That's no fun," manager Joe Maddon said after the game. "Having been an expert in pulling hamstrings, it's no fun. It hurts. Everything you do, it grabs. Who knows? Maybe it's not going to be as bad as we think."

Contreras laid on the outfield grass for a few moments before slowly limping off the field with help from the Cubs' training staff. He was hitting .274 with 21 home runs and 70 RBIs before going down. He has done most of his damage in the past six weeks, with a 1.089 OPS since July 1.

"It's one of our horses," first baseman Anthony Rizzo said. "We'll just have to step up and pick him up ... It's upsetting for him and for us, too. We just have to keep playing baseball."

The Cubs expect at least a 10-day disabled list stint for Contreras, meaning newly acquired backstop Alex Avila will be thrust into the spotlight. Chicago was smart in acquiring a starting catcher instead of just a body at the trade deadline, as Avila came in to fill the hole left byMiguel Montero's departure. Now he's a starter again.

"I've caught most of the guys already," Avila said. "It usually doesn't take me too long to feel pretty comfortable with a pitcher back there."

Avila was behind the plate on Wednesday in the Cubs' loss to the Giants.

The timing of Contreras' injury could only be worse if it came in Septemberor October. Chicago is in a dogfight in the NL Central and just lost two of three to a last-place team. Now, the Cubs travel to Phoenix to take on one of the best home teams in baseball, the Arizona Diamondbacks.

Maddon is hoping for the best after his team dropped its third consecutive series and has now lost its most valuable player this season.

"As bad as it seems on the surface, it could galvanize the group," he said. "They know that he's not here and now other guys realize, 'Let's go, we have to pick up the slack.'"

The one other hopeful thought came from Contreras via Rizzo.

"He's in good spirits," Rizzo said. "He said he's had it worse than this before."

The Cubs are already playing without starting shortstop Addison Russell (foot) and will call up Victor Caratini to take Contreras' spot on the roster, assuming he goes on the disabled list. The team has the day off on Thursday.
Report a correction or typo
Related topics:
sportsespnmlbwillson contrerashamstringchicago cubs
Copyright © 2020 ESPN Internet Ventures. All rights reserved.
More Videos
From CNN Newsource affiliates
TOP STORIES