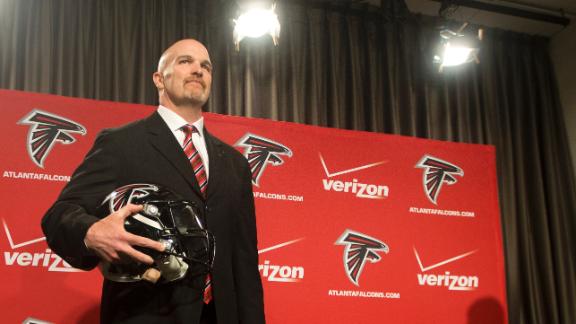 Quinn, the former Seattle Seahawks defensive coordinator, agreed to a five-year deal to coach the Falcons on Monday.

The Falcons announced a change in the front-office structure in January that designated that Quinn and Dimitroff would report to Blank separately. Pioli assumed responsibility for free agency and the draft while reporting to Dimitroff in the process.

The restructuring marked a shift of power away from Dimitroff, although the Falcons refuse to refer to it as such. When the organization parted ways with former coach Mike Smith, some wondered whether Dimitroff would be next. But Dimitroff will remain in the fold.

Blank went on to say the structure isn't unusual in the NFL. New England Patriots coach Bill Belichick and Seattle Seahawks coach Pete Carroll have final say over their rosters, as does Lovie Smith in Tampa Bay, just to name a few.

"Ten of the clubs work this way, including eight that have hired new head coaches since 2010,'' Blank said. "So it is a current trend. More importantly, this is about maximizing the capabilities of Thomas and Scott while adding Dan's unique [perspective].''

Dimitroff shrugged off any loss of power.

"One of the most important things to me is to come together in a partnership and come together as a team,'' he said. "This is not about individuals. This is about working together, side by side. I said it back in 2008, the day I came into this organization, and I believe it today: This is not about who has authority over anything in particular. This is about working together.

"And I'm strongly encouraged by our approach in this and I'm so excited about kicked things off with Dan. He's a heck of a partner. He's a loyal guy. He's a guy that understands football and playing fiery, passionate and free. And that's the important thing. It's not about who has the final 53 or who has authority over one thing or another. It's about working together. It's about a nice, equal footing and a partnership together. And I believe we will have that for many years to come.''

Quinn downplayed the significance of having control over the rosters.

"I think, really, Thomas and I are going to collaborate,'' Quinn said. "For he and I to be this close and connected, that was an important part for me. You know when you meet somebody right off the bat, you know you can connect? It's like, I don't know if you met your roommate in college or whatever where it was like, 'OK, this is my kind of guy.' So for he and I to connect in that way to talk about players, I can't wait to get started with him and go through the whole process together.''

Falcons Believe In Quinn
Louis Riddick, Field Yates and Dan Graziano discuss what Dan Quinn will bring to the Falcons.