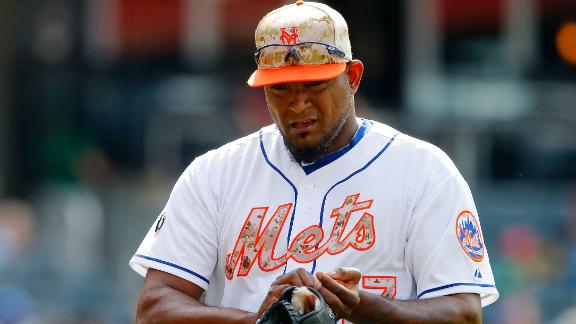 NEW YORK -- The Mets made a pair of dismissals Monday, firing hitting coach Dave Hudgens and releasing reliever Jose Valverde, after a 5-3 defeat against the Pittsburgh Pirates on Memorial Day.

Hudgens, a longtime colleague of general manager Sandy Alderson, was in his fourth season as hitting coach. He will be replaced by Lamar Johnson, who had been the organization's minor league hitting coordinator for the past decade.

Johnson, 63, served as a major league hitting coach from 1995 through 2003 with the Milwaukee Brewers, Kansas City Royals and Seattle Mariners. He had a nine-year career as a first baseman, primarily with the Chicago White Sox.

The Mets are 7-17 in May despite relatively solid starting pitching. The team is batting a collective .237 with a .310 on-base percentage this season. The Mets have failed to drive in a run in their last nine at-bats with the bases loaded. They grounded into five double plays in Game 1 of a doubleheader Sunday against the Arizona Diamondbacks, matching the franchise record for a nine-inning game.

"This is a very difficult decision to have to make," Alderson said. "I've known Dave for many years -- decades. I have tremendous respect for him, his expertise, his work ethic, his personal relationships with players. He's just an incredibly hard worker. At the same time, we've had issues, home and road, over the last several years -- not just this season. The situational hitting is not where we want it to be.

"Our hitting approach will not change appreciably. Any time there is a new person, there is a new voice, a new take, a different interpretation both from a mechanical as well as an approach point of view. ... Dave has been in the game a long time. I think he understood the circumstances. As I said, it's a difficult decision and it's not always a question of black and white. We felt this was something we needed to do, and do it now, after almost two months of the season. But Dave has been with us since 2011, and some of the issues, at least, have existed since that time."

Alderson added that this was not a warning shot suggesting manager Terry Collins is on shaky ground.

"I think this is in response to a specific situation," Alderson said. "Nothing else should be read into it by any means."

"When you struggle the way we've struggled offensively, the finger obviously gets pointed," Wright said. "A lot of times that finger gets pointed pretty unfairly. We, as players, are the ones up there not getting the job done."

Hudgens defended his players to MLB.com.

"I really just think guys tried too hard at home," Hudgens told MLB.com after his firing. "I think the fans are really tough on the guys at home. How can you boo Curtis Granderson? They have no idea how hard this guy works and how he goes about doing his business, doing his job. He gets off to a slow start and they're booing him? Come on. It's tougher at home to play than it is on the road, there's no doubt about it. And they're trying really hard at home.

"You can see it in the statistics," he added. "The fly-ball rates went up, the swing-and-miss rates went up at home. I think we were first in the league in runs scored on the road, so I think guys were relaxed on the road. They could just go out and play the game, don't worry about anything. Then at home, they're trying to do so much. I've never seen that work out -- especially young players trying to do more than they should be doing."

Vic Black will be promoted from Triple-A Las Vegas to take Valverde's bullpen spot. Black is logging considerable frequent-flier miles in a 48-hour span. He flew from Las Vegas to New York to serve as the 26th man for Sunday's doubleheader then flew Monday morning to El Paso, Texas, to rejoin the Triple-A club.