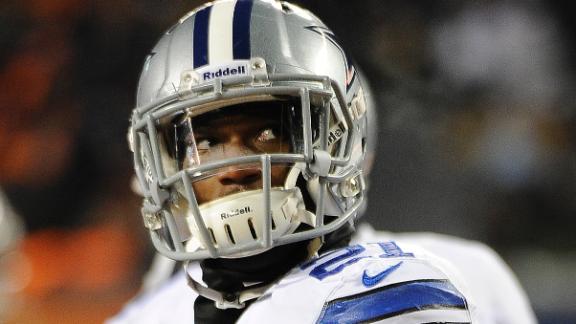 IRVING, Texas -- Dallas Cowboys wide receiver Dez Bryant and running back Joseph Randle got into an argument as the media was entering the practice field Friday.

Bryant did not divulge what the argument was about when asked after practice, but a source said it was related to a comment Randle made during the running back's arrest earlier this month in reference to a July 2012 incident involving Bryant and the receiver's mother.

"Dez didn't miss no games for slapping his mama," Randle said in the video, obtained by KDFW-TV, that was taken while he was being booked after stealing underwear and a tester bottle of cologne form a Dillard's in Frisco, Texas.

Randle was wondering aloud if he'd be suspended by the team for the shoplifting arrest.

In July 2012, Bryant was accused of hitting his mother, Angela, but the misdemeanor family assault charge was eventually dismissed.

In the video, Randle also made a comment about Josh Brent, who was convicted of vehicular manslaughter for his involvement in an accident that led to the death of teammate and friend Jerry Brown in 2012.

Brent returned to practice this week and still has two games left to serve on his 10-game suspension.

Randle made other flippant remarks while being booked, including asking a female jail employee if she would give him a massage if he paid her $100 and asking why his height and weight were not on his mug shot.

"This is not a damn trading card," a male jail employee responded.

Randle only told reporters that "I regret saying everything" after Friday's practice.

While the team was stretching, tight end Jason Witten took his helmet off and told Randle to be quiet. There were no other incidents before the portion of practice that was open to the media concluded.

"Look, there's fiery guys," he said. "Things happen all the time. It just so happened (the media) probably were out there for a little of it. So we're going places. We're trying to move on from last week's game. All that's handled and you move forward."

The Cowboys fined Randle a game check after the arrest, but he was not suspended.

Coach Jason Garrett had no comment after Friday's practice. On Thursday, he was asked about the importance of representing the organization in a positive way.

"We expect people to represent themselves the right way and respect that privilege. That doesn't mean everyone is going to do everything the right way, we recognize that -- people are human beings. But certainly you want to be accountable for things that you do that aren't right and learn from them and move on."

Calvin Watkins of ESPNDallas.com contributed to this report.

Randle, Bryant Bicker Over Booking Video Comment
ESPN Cowboys reporter Todd Archer explains that the Friday argument between wide receiver Dez Bryant and running back Joseph Randle likely pertained to comments made by Randle while he was being booked for shoplifting.

Friction In Dallas?
Adam Caplan discusses the report that Cowboys RB Joseph Randle and WR Dez Bryant got into an argument during practice.

How Do The Cowboys Match Up With The Cardinals?
Todd Archer and Jean-Jacques Taylor discuss how the banged-up Cowboys defense matches up with the Carson Palmer-led Cardinals offense.

If Romo Can't Go, Weeden Poised For Success
Todd Archer and Jean-Jacques Taylor discuss how important it is for the Cowboys to get back on the winning track, and whether quarterback Brandon Weeden will be successful if Tony Romo is unable to play.