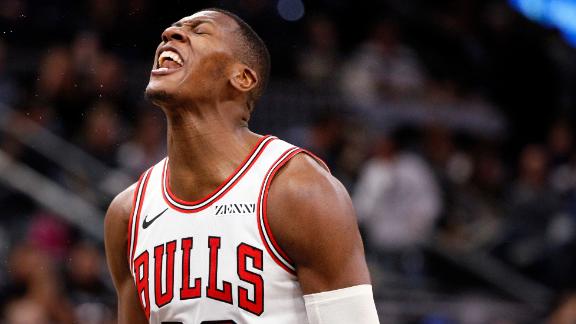 Boylen even learned how to withstand a crisis and it helped him beat his mentor.

Kris Dunn scored 24 points, Lauri Markkanen added 23 and the Bulls rallied from a 21-point deficit in the second half to stun the Spurs 98-93 on Saturday night.

A Spurs assistant from 2013-15, Boylen is 2-4 since replacing Fred Hoiberg as Chicago's coach. His early tenure includes the Bulls holding a players-only meeting to air their dislike for Boylen's no-nonsense style.

But Boylen learned to be brutally honest and demand his team execute properly whether leading or trailing. Those instructions paid off Saturday.

"Coach Boylen had them ready and the character and fortitude they showed being down at half by 19 is a real tribute to what they are trying to establish in Chicago," Popovich said.

The Bulls outscored the Spurs 55-31 in the second half, including a 13-4 run to close the game.

"It shows a lot of heart from the team to climb back," Markkanen said. "Obviously, it takes a lot of energy to dig yourselves a hole and then we've got to climb back up, but it shows what we can do. If we play like that as a team, we have a chance to beat anybody."

LaMarcus Aldridge had 29 points and 12 rebounds for San Antonio, which dominated the first half. DeMar DeRozan added 21 points.

Bobby Portis' nine-foot jumper with 1:39 remaining in the game gave Chicago its first lead since a pair of one-point advantages in the opening two minutes of the game.

Dunn added six points in the final 40 seconds to complete the come-from-behind victory for a Bulls team that struggled to gain any momentum in the first half.

"My team believes in me and it was a good team win," Dunn said.

Chicago committed only three turnovers in the second half, including just one in the fourth quarter when it outscored San Antonio 24-15.

"The key to the second half and the fourth quarter in general was our defense," Bulls point guard Ryan Arcidiacono said.

The Spurs led 62-43 entering the second half but promptly committed four turnovers in the opening two minutes of the third quarter.

Bulls: Guard Zach LaVine did not travel with the Bulls, missing the game with an injured left ankle. ... Forward Jabari Parker was in uniform but did not play.

Spurs: San Antonio guard Marco Belinelli, who finished with 12 points, made his first four 3-pointers and finished 4 of 5. Belinelli has twice made seven 3-pointers in a game this season, the most recent Nov. 19 at New Orleans. ... The Spurs entered the game shooting 83 percent on free throws, which would be the second-best total in league history if it stands. Boston set the league mark by shooting 83.2 percent in 1990.

Boylen said it was very difficult to leave San Antonio to take another job in coaching, but he did keep a piece of his heart in the city. He still owns the house his family lived in when it was in San Antonio.

"I love San Antonio," Boylen said. "My kids, my wife and I, we loved living here. I just couldn't sell it. It broke my heart to put it on the market, so we kept it. We leased it to a beautiful family. It's in a Cul-de-sac, there's a pool, it's just a safe place. It's hard to get rid of a safe place."

Boylen met the family who leased his home for the first time Friday.

Spurs center Pau Gasol missed his 21st straight game with a sore left foot and his return is unknown.

"There's no contact or competitive stuff at all," Popovich said. "He's just shooting in place and that kind of thing. Seems like it's going to take a while."