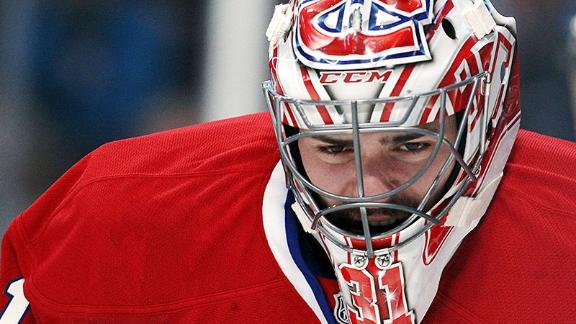 MONTREAL -- Twenty-four-year-old goaltender Dustin Tokarski made a surprising start for the Montreal Canadiens in Game 2 against the New York Rangers Monday night at Bell Centre in wake of the devastating injury news to Carey Price.

Price is done for the remainder of the Eastern Conference finals against the Rangers as a result of an injury sustained in game 1 of the series.

Tokarski, who played 41 games for the Hamilton Bulldogs of the American Hockey League this season, got the nod over backup netminder Peter Budaj, who relieved Price in the third period of Saturday's 7-2 loss to New York and gave up three goals on five shots faced.

Although Price continued to play in Game 1 after the contact, he was pulled after two periods, during which he surrendered four goals on 20 shots.

Several Canadiens players and Therrien were upset about Kreider's actions on the play, insisting he did not do enough to avoid contact. He was booed by fans during Game 2 whenever he touched the puck.

Therrien called it a "reckless play" Monday in his pregame media briefing from the team's practice facility in Brossard, Quebec.

Therrien told reporters that he has decided who would start in net for Monday's Game 2 but did not wish to make it public.

Price was rock-solid for the Canadiens throughout the season and also led Team Canada to a gold medal in the 2014 Sochi Olympics.

"As a goalie you obviously feel for him. You always want to play this time of year," said Rangers goaltender Henrik Lundqvist, who has recorded four consecutive playoff wins. "I don't want to put too much focus on what's going on in the other side. I have to focus on my own game. It's tough enough as it is."

That said, Lundqvist defended Kreider's actions when asked whether he anticipated any sort of retaliation by Montreal in Game 2.

"I hope not," he said. "I looked at it. It was an accident. You have to look at Kreids; he's one of the fastest guys, he's a heavy guy. Just to change direction at that speed, it's tough. It's a 2-0 game. Of course, he's going to score."

Engulfed by a throng of reporters at his stall Monday, Kreider said he had only one regret on the play.

"I look back on it and think I wish I would've put it into the net," he said.

Amid criticism from the Canadiens side that he has a previous history with goaltenders -- Kreider was whistled for goalkeeper interference against the Penguins' Marc-Andre Fleury in Game 6 in the conference semifinals -- Kreider said he has been and will continue to play with physicality and drive the net.

"I think I'm a clean player," Kreider said. "I don't go out with the intent to hurt anyone ever."