Dwyane Wade 'caught in the moment' during fined gesture 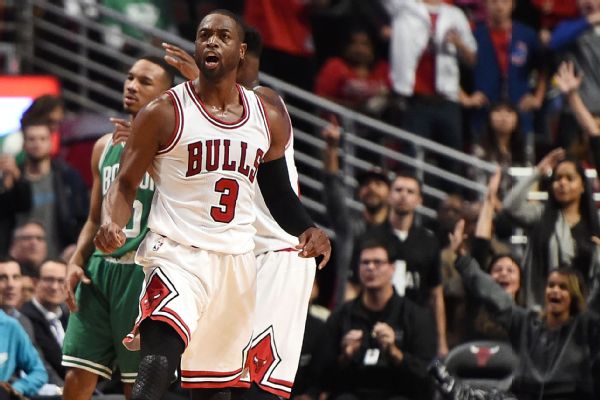 CHICAGO -- Bulls guard Dwyane Wade says he was not surprised by his $25,000 fine from the NBA for making a throat-slash gesture at the end of Thursday night's win over the Boston Celtics.

"They call you, they talk about it, you talk about it, and they decide what they're going to do from there," Wade said after Saturday's shootaround. "But obviously I've been in this league for a while, so when they called me -- I knew they were going to call me before they called -- but like I told them, I didn't mean anything malicious by it. I was caught in the moment. But when I got done, as soon as I did it, I was like, 'Yeah, that's a fine.'

"But it is what it is. There's rules to this game. You have to respect the rules, and when you don't you get fined, so it's all good."

Wade hit a game-clinching 3-pointer with 26.3 seconds left and acknowledged after the game he had an "out-of-body experience," with the emotions running high in his Bulls' regular-season debut.

Wade, who scored 22 points, grabbed six rebounds and dished out five assists in the win, tweeted out an apology Friday before the fine became official.

"I've been on a few calls with [the league office]," Wade said. "And I always tell the truth. Whatever it is, they've got film, they see everything, and you deal with it and you just move on from it."

The 34-year-old kept a good sense of humor about the fine, noting that he was putting up jumpers during a first-half war of words that included Bulls teammates Jimmy Butler and Rajon Rondo and Celtics players Jae Crowder and Isaiah Thomas. All four players were assessed technical fouls as Wade stood to the side and took a practice jumper.