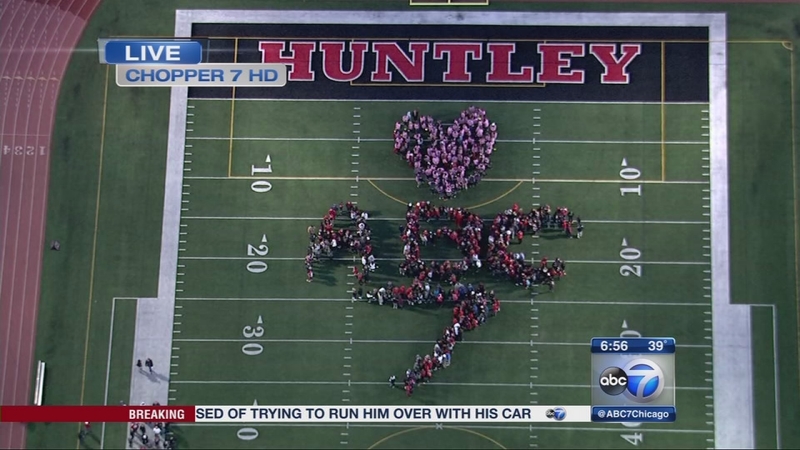 
The Raiders will take on the Crystal Lake South Gators at home Friday night. The sophomore game begins at 5 p.m. The varsity game kicks off at 7:30 p.m.

Fun Facts:
-HHS partners with the Centegra Huntley Hospital to offer students in the medical academy a one-of-a-kind high school medical rotation experience studying under medical professionals at Centegra Hospital Huntley in all departments prior to graduation.
-HHS's Blended Learning program is in its 6th year and has been highlighted on CNN.com, Parenting Magazine, Getting Smart.com and other national media, and was the subject of a positive, peer-reviewed case study in eLearn Magazine.
-HHS just completed a $35.9 million expansion to meet the needs of the growing student population and to modernize the school to provide a 21st century learning space.

-Now the 25th-largest school district in the state, in the early 2000s, Huntley was the fastest growing school district in Illinois, with the high school's enrollment increasing about 300 percent since that time.
-Huntley Community School District 158 spends less per student than any other K-12 unit district in the Chicago metropolitan area, representing a tremendous value to the community.
-Huntley High offers more Project Lead the Way biomedical science courses than any other in the state.
-HHS has been named to the College Board's AP Honor Roll for four consecutive years, denoting increases in access to and achievement on AP exams.
-In 2016, all HHS students received a Chromebook, completing a district-wide 1:1 program that marks Huntley 158 as the largest fully 1:1 district in Illinois.
-HHS has been named to the Washington Post's Most Challenging Schools in America list for two consecutive years.

School History:
-High School opened in 1997 with a student enrollment of 100 freshmen students and approximately 400 total.
-Enrollment for this 2016-17 school year is 776 freshmen, with a total population of 2,957.

Awards/Accolades:
-HHS has been named to the Washington Post's Most Challenging Schools in America list for two consecutive years.
-HHS has been named to the College Board's AP Honor Roll for four consecutive years, denoting increases in access to and achievement on AP exams.
-HHS has received platinum recognition as a PBIS (Positive Behavior Intervention and Supports) school.