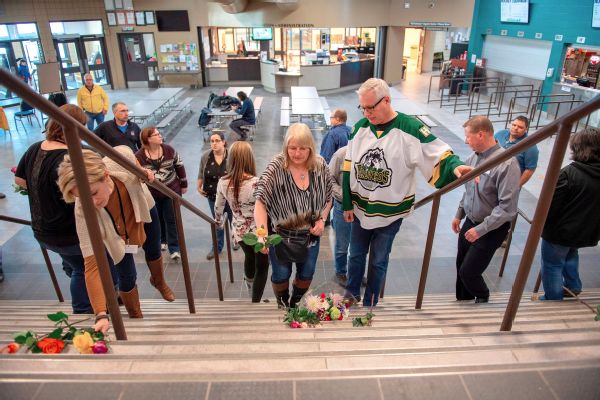 A fundraiser organized for the families of the Humboldt junior hockey team tragedy had a goal of raising $4 million.

It was reached in 45 hours.

"There are no words that could express the incredible support the hockey community has seen here," wrote Sylvie Kellington, a woman from Humboldt whose son played for the youth version of the team and who posted the fundraiser on the GoFundMe website on Friday night. "Almost 60,000 people from almost 60 countries around the world have heard our story and were moved to help."

According to the GoFundMe page, "Money will go directly to families to help with any expenses incurred."

Large donations came in from sports teams, including $20,000 from the Pittsburgh Penguins players, staff and foundation, $10,000 from the Calgary Flames and a junior hockey team in Calgary called the Hitmen, $10,000 from the Toronto Maple Leafs and $10,000 from the Chicago Blackhawks Alumni Association. Los Angeles Kings defensive Dion Phaneuf was also listed on the site as having donated $10,000.

The Humboldt fundraiser had reached nearly $4.2 million as of 8:35pm ET Sunday.