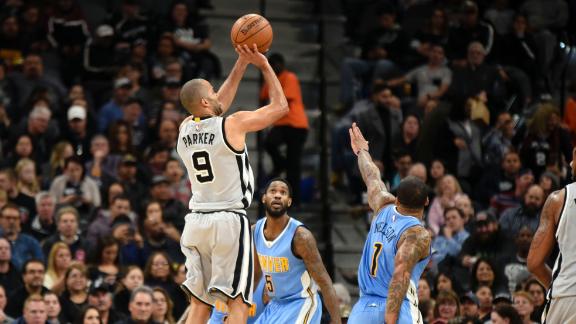 SAN ANTONIO -- Manu Ginobili knew how important Gregg Popovich is to the San Antonio Spurs even before the coach set the NBA record for most wins with a single franchise.

Popovich earned his 1,128th victory Saturday night, leading the Spurs to a 121-97 victory over the Denver Nuggets. He passed former Utah coach Jerry Sloan for the mark.

"The record is just a number," Ginobili said. "He didn't need that record to define what he means for this franchise, the NBA, in the last 20 years. The fact that he's been the coach of the team for so many years is already an impressive accomplishment.

"If you add five rings and this type of record, having 70 percent or more winning percentage, it's incredible what he's done. He's going to keep doing it. I'm pretty sure he's going to get some more."

"It speaks to the fact that he's arguably the greatest coach the NBA has ever seen," Malone said. "It speaks to the commitment that they have made to him here in San Antonio, the longevity. Pop is a tremendous coach, and the greatest accomplishment is not just the success, but also the sustained success they've had over and over again."

Kawhi Leonard led the Spurs with 19 points in San Antonio's final home game before playing eight games on the road during its annual rodeo road trip. Ginobili and Tony Parker each added 18 points for the Spurs.

"It's important to win that one," Parker said. "We were serious tonight. The energy was good and now we have to maintain it on the road."

Jamal Murray scored 20 points off the bench and Nikola Jokic had 11 in 15 minutes for Denver, which was playing the second game of a back-to-back and fourth in five nights. The arduous schedule seemed to catch up with the Nuggets in the second half. San Antonio opened the third quarter on a 21-7 run.

Ginobili and Parker have been part of 639 of Popovich's wins, and the veterans turned back the clock in the record-setting win. The 39-year-old Ginobili set a season high for points despite sitting out the entire second half, going 4-for-5 on 3-pointers. The only player older than Ginobili to score 18-plus points for the Spurs was Tim Duncan, the final member of the team's vaunted Big Three, who had 21 points against Denver on April 8, 2016.

"Manu was on fire," Parker said. "Look like the old days, shooting the ball like that. He played with a lot of confidence -- it was great to see."

Parker finished 8-for-8 from the field after scoring just one point in the team's previous game. The 16-year veteran had four straight points midway through the first quarter, including a layup ahead of Jokic after a steal against Jameer Nelson.

Ginobili topped that with 10 points in four minutes and 16 of the team's 18 points in his initial seven minutes.

Nuggets: F Danilo Gallinari missed his second straight game with a strained left groin. Gallinari is averaging 17.2 points and 34.2 minutes, both team highs. ... Kenneth Faried had four points and four rebounds, ending his streak of four straight double-doubles. ... Jokic, Faried, Nelson, Wilson Chandler and Gary Harris started for the second time as a unit. They won their initial outing together. ... F Darrell Arthur sat the game out for rest. Arthur missed four straight games with soreness in his lower left leg Jan. 12-20. ... Denver entered the game third in the league in scoring at 110.4 points per game. ... The Nuggets have lost nine straight in San Antonio. Their last win here was March 4, 2012, in a 99-94 decision.

Spurs: Leonard has scored in double figures in 80 straight games. His previous longest streak was 46 in 2015. ... San Antonio has scored 100-plus points in 27 consecutive games, its longest streak since 29 straight in 1988. ... The Spurs finished 3-1 on their four-game homestand. ... San Antonio has 37 alley-oop dunks in 50 games this season after recording 18 all of last season. ... Ginobili's initial 3-pointer against the Nuggets was the 1,400th of his career. His previous season high was 17 points on Dec. 18 against New Orleans.

Spurs: At Memphis on Monday night.