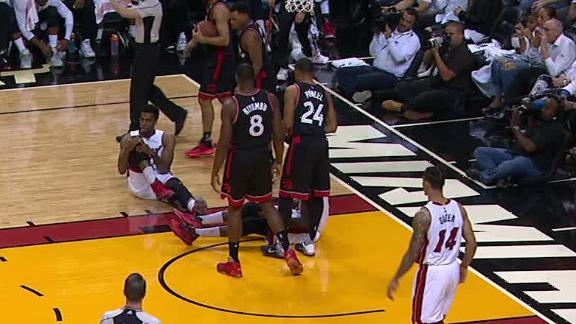 Whiteside injured his right knee early in the second quarter Saturday and was ruled out for the rest of Game 3 against the Toronto Raptors. He is day-to-day, according to the Heat.

After landing awkwardly on an offensive rebound, Whiteside limped off the floor and immediately underwent X-rays, which came back negative.

The Raptors also lost their starting center for the remainder of Game 3 as Jonas Valanciunas suffered a sprained right ankle in the third quarter.

Whiteside had been hampered by a right knee strain after another awkward landing in Game 1 on Tuesday and had to be removed from the game. He returned shortly afterward and logged 39 minutes in the overtime victory. In the Heat's Game 2 overtime loss, Whiteside played 39 minutes again, marking the first time in his career that he had played at least 36 minutes in consecutive games.

He scored six points before leaving Saturday's game with the Heat trailing 25-19. The 26-year-old has posted a team-high 24.0 player efficiency rating this postseason, leading all players with 110 rebounds.

"Guys have to step up," Heat guard Dwyane Wade said."Nobody can be Hassan Whiteside. ... We have to figure out a way."

The Heat center will be an unrestricted free agent this summer after spending the past two seasons with the Heat and finishing third in this season's NBA Defensive Player of the Year vote behind San Antonio Spurs forward Kawhi Leonard and Golden State Warriors big man Draymond Green.

The Whiteside injury comes on the heels of the Heat announcing Wednesday that big man Chris Bosh will miss the remainder of the postseason after being sidelined with an unspecific medical condition since February.