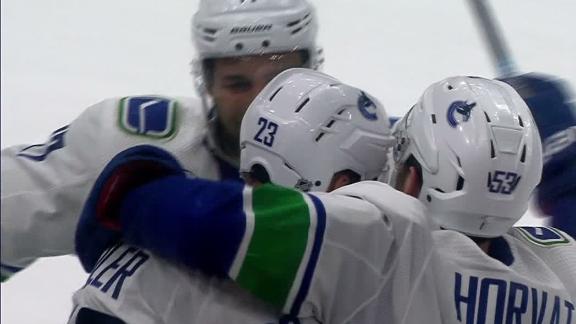 CHICAGO -- All it took was 16 extra seconds and one fancy passing sequence with Bo Horvat and Alexander Edler.

Vancouver is headed home with a little momentum after a pair of solid performances on the road.

Horvat scored 16 seconds into overtime, and the Canucks stopped Chicago's five-game win streak with a 3-2 victory over the Blackhawks on Monday night.

"That was a hell of an effort by our whole group tonight," coach Travis Green said.

Horvat and Edler each had a goal and an assist for Vancouver, which was coming off a 3-2 shootout victory in Dallas on Sunday. Markus Granlund also scored, and Thatcher Demko made 29 saves in his third career win.

The Canucks (31-32-10) remain on the fringe of the playoff race in the jumbled bottom of the Western Conference, pulling within six points of Arizona for the second wild card.

While the postseason is a long shot, they open a seven-game homestand Wednesday night against Ottawa and might be able to build some momentum for next season with a strong finish.

"Getting these wins have been really good for our team," Horvat said.

Jonathan Toews and Erik Gustafsson scored for Chicago (32-30-10), and Corey Crawford made 31 stops. The Blackhawks pulled within four points of the Coyotes, who lost 4-1 to the Lightning.

"I don't think anyone brought their A' game today," Toews said. "We need to win every game. We needed to win tonight and we need to win the next one."

The Blackhawks trailed 2-1 before Gustafsson's long slap shot went off Edler in front and past Demko with 3:13 left in regulation. But Horvat stepped up in overtime, finishing a give-and-go with Edler for his 25th of the season.

"Eagle made a good play to get it back to me and I just wanted to whack at it," Horvat said. "I wasn't even sure it was in until I kind of went past the goalie and saw it was in and threw my arms in the air. It was pretty awesome."

Chicago jumped in front with its first power-play goal since Feb. 27 against Anaheim, stopping a seven-game drought. Toews redirected Patrick Kane's pass through the legs of Demko for his 31st goal with 35 seconds left in the first period.

It was Kane's 59th assist and 100th point on the season. The All-Star winger became the third player in franchise history with multiple 100-point seasons, joining Denis Savard and Jeremy Roenick.

The Canucks responded with two in the second. Edler tied it at 1 when he drove a power-play slap shot by a screened Crawford 53 seconds into the period, and Granlund swept in a rebound at 6:22.

Elias Pettersson picked up an assist on Granlund's 10th goal for his 61st point, snapping a tie with Pavel Bure and Ivan Hlinka for the franchise rookie record. Pettersson was selected by Vancouver with the fifth-overall pick when the draft was held in Chicago in 2017.

"It's special that I broke the record where it all started pretty much," he said. "It's a cool (feeling)."

Game notes
Blackhawks F Drake Caggiula missed his eighth consecutive game after he sustained a concussion against Anaheim on Feb. 27. "He's in the protocol," coach Jeremy Colliton said, "and certainly we're not in the area that we're worried about him being done for the season." ... The Canucks improved to 10-9-1 in back-to-backs this season. ... Former Chicago White Sox slugger Jim Thome was honored after he was inducted into the Baseball Hall of Fame last summer. Thome got a big ovation when he went out to center ice for a ceremonial puck drop. The Blackhawks also observed a moment of silence for Thome's father, Chuck, who died last weekend.