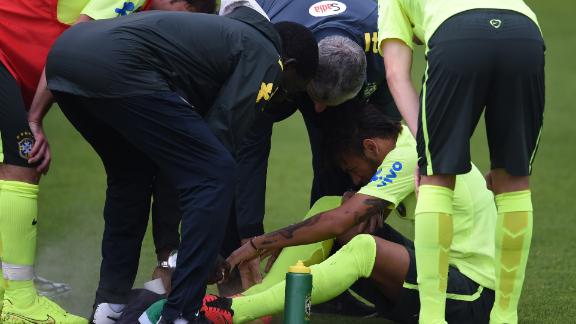 Brazil had a scare after star striker Neymar suffered an injury in training just three days before the start of the 2014 World Cup.

Neymar rolled his right ankle in training and looked to be in some discomfort, leading to concerns about his fitness when Brazil take on Croatia on Thursday.

But the Barcelona forward eventually got to his feet, calming fears that he could be absent for the host nation.

"Everybody knows that Neymar is the player who makes the difference, the star in our team. He is a special player, the whole world will be watching him closely, our opponents will put lots of pressure on him," he is quoted as saying by Eurosport.

Meanwhile, right-back Dani Alves is targeting an impressive start in their Group A opener versus the Croatians.

"The moment of truth is starting now," he told reporters. "It's not just about three points, it should also send a message to future rivals.

"I think it's the most important game of the World Cup, along with the final."

Neymar training injury a concern?
The ESPN FC crew discuss the injury Neymar sustained in practice and the high number of injuries top players have faced leading up to the World Cup.

Brazil not dependent on Neymar
Defender Dani Alves insists the Brazilians are not reliant on star striker Neymar at the World Cup.