It's time to talk about Bryce Harper and the Cubs again 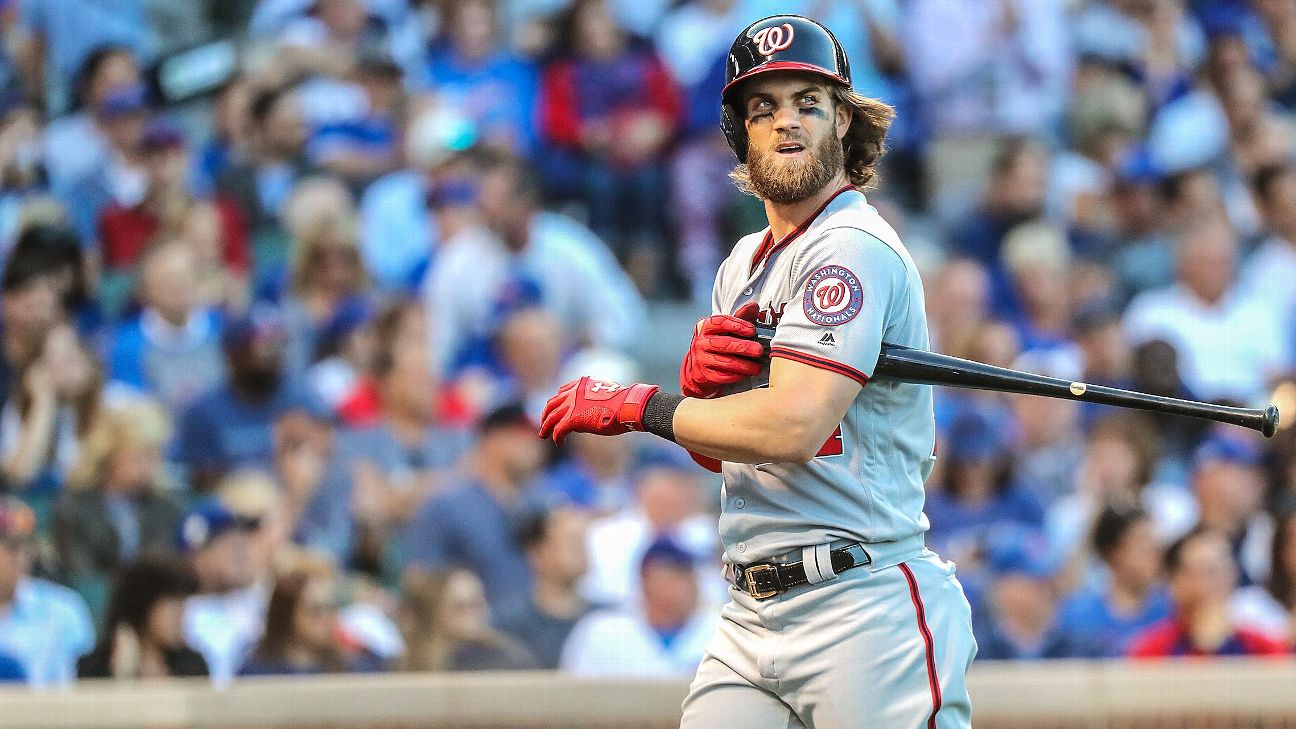 Washington Nationals star Bryce Harper will make his final appearance at Wrigley Field this weekend -- barring a playoff matchup -- before hitting free agency this winter. While he's been mum about where he might play next year, it hasn't stopped Chicago fans from picturing him in a Cubs uniform.

Yet the hype seemed bigger a season ago, two years before free agency. Will it pick up again?

"It's crazy how things can change throughout the season," Harper's longtime friend Kris Bryant said earlier this week. "At the beginning of the year, it was just straight 'he's coming here,' and now you see how everyone in our outfield has performed this year, you look at it and we might be set at that position. But any team that adds him, and adds a dynamic player like that, is going to be better off regardless of what he's done this year."

And therein might lie the change in thinking. Harper has had a good year in other categories, but his batting average has sunk. He's hitting .234 as the Cubs and Nationals enter play against each other. But his OPS ranks second among qualified right fielders in the NL.

"We've gotten better," manager Joe Maddon said. "As a group, our numbers are outstanding, but there's still another level there."

The group has gotten better, but no Cubs outfielder is necessarily having a career-year type of season. The difference has come in how far Heyward and Kyle Schwarber have come after dismal 2017 campaigns. They're respectable this season, and that has brought the whole outfield up. But the question Cubs brass has to answer is what's best for the team going forward.

If Harper's current .879 OPS is an "off" year, then what will it look like when he has another hot one? And is there more in Heyward and Schwarber?

"I'm glad I don't make those decisions," Bryant said. "We have a pretty good front office, with a good track record."

As for knowing where Harper might end up, Bryant hasn't asked him. Not lately, and not last winter when the two and their wives had a game night at Harper's house that attracted plenty of attention.

"Yeah, I guess it did," Bryant said with a laugh. "Any time I talk to him about stuff here [Chicago], it's always been great things, but I haven't talked to him once about next year. ... You want to enjoy [free agency], and it's much tougher to enjoy when you have friends and family asking you if you're going to play with your buddy in Chicago and stuff like that."

A more recent update might come from recently acquired former Nationals reliever Brandon Kintzler. Like Byrant, he and Harper didn't exactly discuss next season, but the general issue has come up.

"We talked before last year," Kintzler said. "I'm sure he'll have some options. Of course, there's only a few teams out there that can afford him."

The Cubs are in that group, but so is Washington, where Harper has become a mainstay. According to Kintzler, what happened in mid-July at the All-Star Game could have been a signal for his former teammate.

"The Home Run Derby reminded him how much he was loved there," Kintzler said. "It was a special feeling in the crowd. I'm sure it would be tough to leave."

And it's well-documented that Harper's agent, Scott Boras, has a strong relationship with Nationals ownership. A blank check might be going too far, but Harper still could get his biggest payday from the only team he has known.

If the Cubs make a run, it will most certainly change their dynamic after staying the course these past few seasons. On a team that rotates five outfielders, there would have to be some roster upheaval before adding Harper. Would they -- and could they -- rid themselves of some payroll in the form of Heyward? Or would they move Schwarber, Ian Happ or Albert Almora to unclog the outfield? This year has added that new question: Do they even need to?

"We're pretty good out there," Bryant re-iterated before giving up on the issue. "Whoever they target, I'm confident they'll help us win games."

Harper might get booed this weekend, as he brings that edge to him that the opposition might hate but the hometown fans love. His personality is the polar opposite of Bryant's, despite their growing up in the same area.

"It's a cocky/confident thing," Kintzler said of Harper. "He knows what his talents are. If he loses that, he's not himself. He's about being himself.

"And he backs up his edge."

Bryant agreed with that assessment, adding: "He would just add to the personalities on this team."

As recently as this past spring, it seemed like a no-doubter: The Cubs would pursue Harper. They still might, but the landscape has changed. As for whether he will stay in Washington or search for greener pastures, Kintzler may have summed it up best.