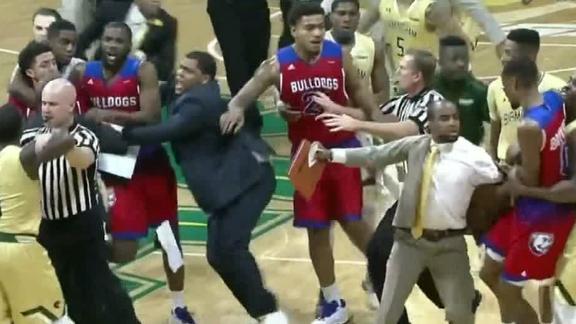 Louisiana Tech guard Jacobi Boykins and UAB guard Hakeem Baxterhave been suspended from their respective teams' games Saturday after their involvement in a wild, benches-clearing fight Thursday night that left the Bulldogs to finish with just four players.

Conference USA announced the suspensions Friday in a statement, saying that the incident was "unacceptable."

"We have reviewed the incident in last night's Louisiana Tech vs. UAB men's basketball game," the statement said. "Although the majority of the individuals involved were attempting to diffuse the situation, what occurred last night was unacceptable."

Boykins and Baxter scuffled while players were sorting out a foul call, and the confrontation escalated. Boykins was immediately ejected for throwing a punch with a closed fist, and both players were assessed flagrant technical fouls and ejected for fighting.

UAB's William Leewas also assessed a Class A technical foul but was not ejected.

Players from both benches spilled onto the floor, and the entire Louisiana Tech bench was ejected for leaving the bench during a fight. Four of the six players on the UAB bench were also ejected. The head coaches remained, but assistant coaches and support staff on both sides were ejected.

With all of its reserves and Boykins ejected, Louisiana Tech played the final six minutes with four players.

In its statement, Conference USA said officials Thursday correctly enforced Rule 10, Article 2, which states: "Any individual who leaves the bench area and enters the playing court but does not participate in a fight shall not be assessed a technical foul. That individual shall be ejected but is not subject to suspension."

Baxter is averaging 8.0 points and 3.4 rebounds per game this season for UAB (13-8, 6-2),which hosts Southern Mississippi on Saturday.