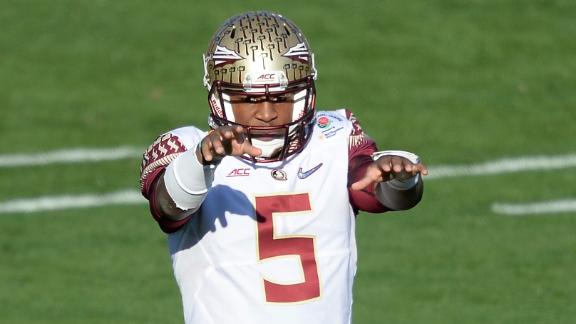 Winston has a mindset on what he wants to do at the combine, butthe 2013 Heisman Trophy winner is discussing his options with his advisers, according to Whitfield.

If Winston throws at the combine, he will do so on Saturday with the other quarterbacks. Whitfield told Mortensen that Winston is still 50-50 on whether he'll throw.

Whitfield also addressed the issue Tuesday during an interview with "SportsCenter," saying that Winston's agency also will have some input in the quarterback's decision.

"There's still some information that his agency is gathering," Whitfield said. "That's more of an agency element. He's prepared to do it. But the agents have different concerns."

Marcus Mariota, the other Heisman-winning quarterback in this year's draft class, has informed teams that he will throw Saturday at Lucas Oil Stadium, sources told Mortensen.

Although questions remain about Mariota's ability to transition fromOregon'sspread offense to a pro-style system, there is little doubt regarding Winston's throwing ability.

"He just could be tightened up and play more urgently," Whitfield said. "He's getting a lot sharper. He looks great."

Winston was projected as the No. 1 overall pick to the Tampa Bay Buccaneers in the latest mock draft released by ESPN NFL Draft Insider Mel Kiper Jr.

Bucs coach Lovie Smith said Wednesday that based on what he knows at the moment, he wouldn't hesitate to select Winston with the top pick.

"In my humble opinion, if you line up the 32 quarterbacks in the NFL, and I could take two guys [to compare Winston to] ... my opinion would be Ben Roethlisberger and Philip Rivers," Whitfield said.