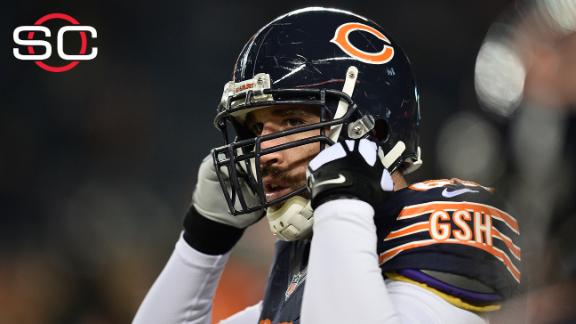 Allen publicly shot down the idea of switching from defensive end to outside linebacker while a member of the Minnesota Vikings in late 2011.

"You know what, that was a little ignorance talking, I have to be honest," Allen said at the Bears' organized team activity.

"I didn't know anything about it [playing OLB]. I obviously do love the traditional [4-3 defensive end role]. I played in a Tampa 2 defense my entire career, so there is a part of me that absolutely loves putting my hand in the dirt and that individual matchup with the left tackle in run or pass, or with the tight end. But this as a football player is fun, it really is -- the different styles of matchups you get and some of the one-on-one rushes it creates are really fun. Ultimately, it's kind of the same stuff, but later in my career it's easier on my body because I'm not technically banging every single day."

After the 33-year-old Allen recorded a career-low 5.5 sacks last year, the Bears transitioned to a 3-4 defense in the offseason under respected coordinator Vic Fangio. This marked a radical departure for Allen, who for 11 seasons rushed the quarterback from his customary defensive end spot in a 4-3 front.

However, the Bears are convinced that Allen's best spot in the new scheme is at outside linebacker, with Fangio going as far to say that he thinks the position change can revitalize Allen's career.

"Yeah, that is what he told me," Allen said. "My body feels fresher because I'm not banging every single day and putting my hands on a 300-plus pounder and banging heads and that kind of stuff. I like it because it is testing my football IQ. I've always loved the game and have always been a student of the game. Sometimes it can get monotonous and you play the same thing over and over and see the same blocks over and over. You have to work really hard at not getting complacent with your technique. This is a totally different thought process for me and it's really forcing me to study.