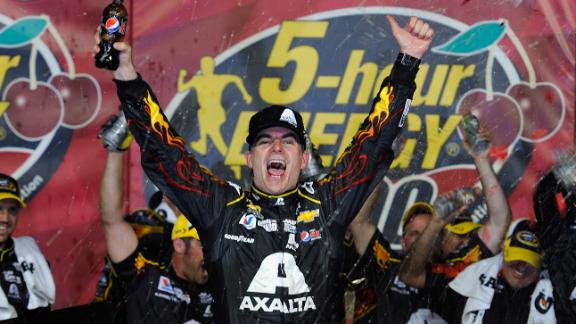 KANSAS CITY, Kan. -- At any age, Jeff Gordon sure knows how to win.

Nearly two decades after he burst onto the scene with his first victory, Gordon keeps taking checkered flags, storming to the lead in the final laps at Kansas Speedway on Saturday night for his first victory of the season and 89th overall in NASCAR's top series.

The 42-year-old Gordon held off a hard-charging Kevin Harvick on the final lap to move into the Chase for the Sprint Cup championship field.

Gordon won for the first time since October at Martinsville and became the ninth driver to win in the first 11 races this season. He entered the race with the points lead, but exclaimed a weight was lifted off his shoulders as he crossed the finish line for his third Kansas victory.

"I'm just so proud of (the 24 team). They have been giving me the best race cars all year long," Gordon said. "I have been having so much fun. I'm going to be 43 this year and I feel like I'm 25 again. That is the way they make me feel."

Danica Patrick was seventh for her best career Cup finish.

Gordon built his points lead on the strength of four top-fives and seven top-10s in the first 10 races -- including second-place finishes at Texas and Richmond -- but he knew how much one win would ease pressure on his Hendrick Motorsports team.

He got it under the lights at Kansas.

"This is so sweet," he said. "What a huge weight lifted off this team's shoulders. We needed to get to Victory Lane."

Gordon is celebrating the 20th anniversary of his first career Cup victory at Charlotte Motor Speedway in the prestigious Coca-Cola 600. He will go for his fourth Coca-Cola 600 victory May 25.

At Daytona this year, Gordon insisted he was serious about considering retirement with a fifth championship. He looks every bit a title contender -- but said he feels like he could race until 50 if his cars are this stout.

"The whole retirement thing I think is thrown out too much," he said. "I know I'm somewhat to blame for that."

After the start of the race was delayed 35 minutes by rain, the first Sprint Cup night race at Kansas soon left drivers in the dark after the lights went out on the backstretch. NASCAR polled drivers if they wanted to continue and they were good to go, with Kurt Busch and Carl Edwards among the many who said the track was bright enough to race.

Harvick led the final 36 laps in his October win and led the first 41 on Saturday before briefly falling into the middle of the pack. Harvick worked his way to the front in the No. 4 Chevrolet and opened a commanding lead over Gordon and Logano. He led a race-high 119 laps in the 400-mile race -- small consolation once Gordon grabbed the lead with eight to go.

With two wins already, Harvick has been a force in his first season at Stewart-Haas Racing, but his dominant Chevrolet ran out of gas on his last pit stop and lost time that he couldn't recover.

"I should have been paying attention to my pit road lights and should have got off pit road better," he said. "I made a mistake at the end and it cost us a chance to stay out in front of the 24."

Patrick had her best run of the season, spending most of the race nestled inside the top 10, and brought a needed jolt of electricity when she passed teammate Tony Stewart and Earnhardt to move into third with 95 laps left.

Patrick hadn't finished better this season than 14th at Fontana and her lone top-10 in the Cup series was an eighth-place finish in the 2013 Daytona 500.

She was shuffled back on a restart, costing her a top five.

Patrick beamed in the garage after the kind of finish she'd been striving for since her dazzling performance at Daytona more than a year ago.

"I know that we haven't had the best of times, but we work hard for it," Patrick said. "This is the kind of stuff that materializes in wins. We've just got to keep hanging around and doing what we're doing. I'm just proud of everyone for working really hard and believing in me."

Sara Christian's fifth-place finish in a 1949 race remains the best for a female driver in NASCAR's top series.

Jamie McMurray and David Gilliland both had their cars erupt in flames in separate accidents. Gilliland was slow to exit his No. 38 Ford and gingerly walked away from the smoldering wreckage. He was checked out and released from the infield care center.

"It was the hardest hit I've had in a long time," he said.

McMurray had a solid run derailed when he smacked the wall and the back of his No. 1 Chevrolet caught fire.

"I heard a small pop, and then just lost all the steering and got into the fence," he said.