Josh Norman: Odell Beckham Jr. should have been tossed 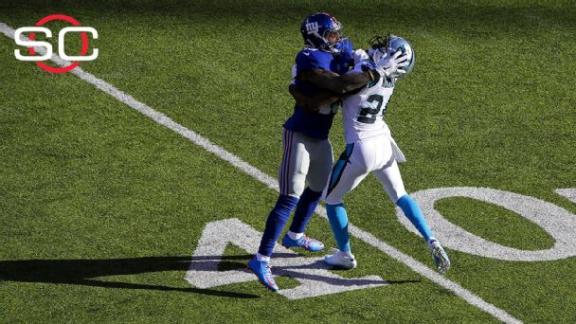 Calling Beckham a "ballerina," Norman was particularly incensed that Beckham took a deliberate shot to his helmet in the second half. Norman said he hopes the league punishes Beckham.

"The guy ran 15 yards down the field, dead-on collision,'' Norman said after Carolina improved to 14-0 with a 38-35 victory. "The play was all the way to the left side. He came back and was hunting, and it was just, like, malicious in every way.

"I hope the league office gets a chance to review the film and see what they can do, because players like that don't deserve to be in the game,'' Norman said. "I mean, it's ridiculous."

"The disqualification of a player is a judgment made by the on-field officials," the NFL said in a statement. "The actions of the players involved in unsportsmanlike conduct will be reviewed as per the standard protocol that is followed in all situations of this type throughout the season."

At one point, Beckham charged and launched himself into Norman with a helmet-to-helmet hit after a play was over.

"It was ridiculous,'' Norman said. "I think it was personal. He was trying to come at me. I didn't take nothing personal. I just went out and did my job.''

Norman said the style of play was out of character for Beckham.

"You know you don't train like that," Norman said. "That's not you. That's not who you are.

"You're going to be Michael Jackson and go around and dancing and playing and a lot of other stuff and not be a football player and not train the way you're supposed to train. It goes to show. I hope I pulled that mask off. I pulled back the face of what that dude really is. You want to play football, play football. Don't come out here and do all that extra stuff."

Giants coach Tom Coughlin said Beckham lost his composure but regained it later in the game. He also said he had spoken to Beckham before the game about this very issue.

"We had discussed prior to the game, going in, what the expectation would be, and he thought that that was all behind him," Coughlin said. "But he did lose his composure. ... I'll talk to him about it, and I'm not going to discuss anymore. Whatever we have to discuss, we will discuss in private."

Beckham beat Norman on one play early but dropped what would have been a touchdown pass. He was held without a catch in the first half.

Things appeared to hit a boiling point with Beckham and Norman in the third quarter, when Coughlin said he strongly considered taking Beckham out to avoid any harm, especially with the Giants trailing by as much as 35-7.

"I wanted him to play the game," Coughlin said. "He had to learn. He's gotta learn at some point how to deal with some things on the field."

A second-year receiver, Beckham, 23, finished with six catches for 76 yards and a touchdown that tied the score at 35-35 with 1 minute, 46 seconds remaining in regulation.

After the game, Beckham was asked about Norman and whether he lost his cool and would only say that it was "unfortunate" the Giants lost.

Beckham also repeatedly credited the Panthers and took blame for dropping an early touchdown pass. He said he regretted his three penalties but added that the officials usually flag the player who retaliates in most cases and that the score would still end up "35-35 in the fourth quarter" despite the penalties.

"You never want to hurt your team like that, and I have learned throughout my life, always, second man gets caught," Beckham said. "It is just unfortunate."

When asked if he is concerned about facing further punishment from the league for his helmet-to-helmet incident, especially with so much attention surrounding head injuries, Beckham said, "Not really."

"You go look at the film," Beckham said. "I caught a slant, and the man is diving across my face. This is a tough game."

Norman was asked if Beckham is a young player who needs to mature.

"You going to get out here, and you're going to dance around and prance around like you're a ballerina, that goes to show you," Norman said. "When you cut back layers, you see. Everybody saw that live on national TV. There's nothing that I can show that he hasn't already been exposed.

"The maturity level on him is just as a little kid. I think he needs to grow. I tried to do my best to respect people."

Panthers remain undefeated with last-second field goal
SportsCenter Highlight of the Night: After blowing a 28-point lead, Graham Gano's 43-yard field goal as time expires gives the Panthers a 38-35 victory over the Giants.