Julio Jones agrees with Arthur Blank, wants 'to be a Falcon for life' 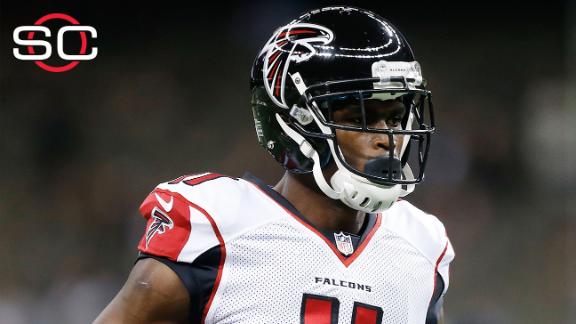 FLOWERY BRANCH, Ga. -- Julio Jonessays he couldn't agree more withAtlanta Falconsowner Arthur Blank, who wants the wide receiver to be with the franchise for his entire career.

"We're on the same page," Jones said Monday. "I want to be a Falcon for life. I guess he made it clear yesterday that they're obviously working toward that. All I can control is what I do out here on this field and stay consistent."

On Sunday, Blank said he expects Jones"to be a lifer for the Falcons."

Blank told The Associated Press on Sunday that he'd be "shocked and disappointed" if Jones doesn't re-sign, indicating that he hopes a new deal is hammered out before the Sept. 14 season opener against Philadelphia.

Jones is letting his agent, Jimmy Sexton, handle the contract talks until the time the time is right for him to say yes or no. Based on recent deals for wide receivers Dez Bryant of Dallas and Denver's Demaryius Thomas, Sexton is likely asking for a long-term contract that guarantees at least $40 million.

"I don't wrap my head around that to get me going or put a pep in my step," Jones said. "Like, 'Hey, he wants me to be a Falcon for the rest of my career, so let me go out and do something else.' Obviously I'd be cheating myself, so every day I challenge myself to come out here and get better."

Jones set a franchise record with 1,593 receiving yards last season on a career-high 104 receptions despite missing one game with an oblique injury.