Kraft: Apology owed if no findings 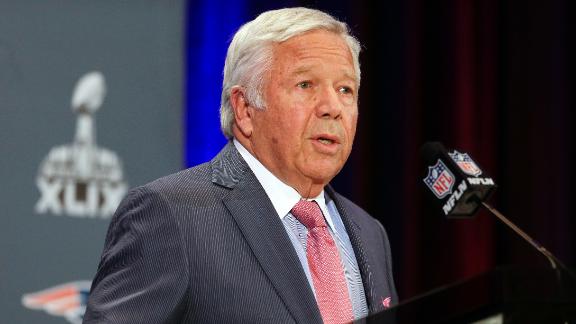 PHOENIX -- Patriots owner Robert Kraft made a surprise appearance at the team's opening news conference of Super Bowl XLIX on Monday, saying the NFL will owe the Patriots an apology if its investigation over deflated footballs doesn't uncover wrongdoing.

"If the Wells investigation is not able to definitively determine that our organization tampered with the air pressure on the footballs, I would expect and hope that the league would apologize to our entire team and, in particular, coach [Bill] Belichick andTom Bradyfor what they have had to endure this past week," Kraft said, referring to attorney Ted Wells, who is leading the investigation with NFL executive vice president Jeff Pash.

Kraft, who did not take questions from reporters, fired back at how the story has generated momentum over the past week, saying in the prepared remarks he was "confident that this investigation will uncover whatever the facts were that took place last Sunday and the science of how game balls react to changes in the environment."

"This would be in direct contrast to the public discourse, which has been driven by media leaks as opposed to actual data and facts," said Kraft, one of the NFL's most influential owners.

"Because of this, many jumped to conclusions and made strong accusations against our coach, quarterback and staff, questioning the integrity of all involved. ...

"I am disappointed in the way this entire matter has been handled and reported upon. We expect hard facts as opposed to circumstantial leaked evidence to draw a conclusion of this investigation."

Kraft also offered a decisiveshow of public support for Belichick and Brady.

"I want to make it clear that I believe unconditionally that the New England Patriots have done nothing inappropriate in this process or in violation of NFL rules," Kraft said.

"Tom, Bill and I have been together for 15 years. They are my guys. They are part of my family. And Bill, Tom and I have had many difficult discussions over the years, and I have never known them to lie to me. That is why I am confident in saying what I just said, and it bothers me greatly that their reputations and integrity, and by association that of our team, has been called into question this past week."

NFL Eyes Patriots Locker-Room Attendant
Chris Mortensen, Bill Polian and Adam Schefter have the latest on the NFL looking into a New England locker-room attendant who allegedly took game balls from the officials locker room to another area on the way to the field.