Magic Johnson: My 'Showtime' Lakers would beat the Warriors 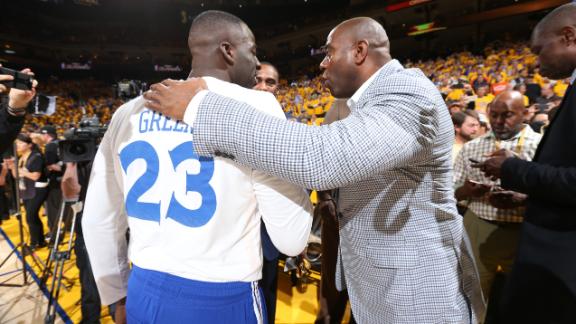 The Golden State Warriors may have set the record for wins in a season and are two games away from capturing a second straight NBA championship, but don't tell Magic Johnson they could beat his "Showtime" version of the Los Angeles Lakers.

And that especially goes for Warriors guard Klay Thompson and his father, Mychal Thompson, coincidentally a member of those famed Lakers teams.

Klay Thompson caught Johnson's attention after the Warriors dismantled the Cleveland Cavaliers 110-77 in Game 2 of the NBA Finals on Sunday.

"We are better than the 'Showtime' Lakers," Klay Thompson said, interrupting teammate Draymond Green, who was asked whether the Warriors could be compared to a team from a previous era.

"I think it's all subjective," Green said before Thompson jumped in. "To say we're better than the 'Showtime' Lakers, how can you say that? We never played them."

Mychal Thompson, a member of two of the Lakers' five championship teams in the 1980s, knows.

"I admit this: We would shoot. And we shot eight 3s a game. They make eight 3s a quarter," Mychal Thompson said Monday on the Thompson and Trudell Show on ESPN LA 710. "Golden State would outscore us 50-15 on 3s. So how are we supposed to win? So I agree with Klay, I think they would beat us. We couldn't keep up with them offensively because of the way they can score so quickly."

Having played on those Lakers teams, and having coached against these Warriors, Byron Scott sees both sides of the debate. And he agrees with Johnson.

"No doubt in my mind, we would have beat them," Scott said Tuesday on The Jump. "Magic's right, there are so many things you can look at when you talk about this matchup.

What about how the game has changed since Scott was a player?

Mychal Thompson played a key frontcourt role in the Lakers' back-to-back titles in 1987-88 before retiring in 1991.

"I am a man secure in my legacy, secure in my accomplishments," Mychal Thompson said. "I don't have to be all, 'Oh, we're better than them.' I'm not that grumpy old man, even though I sound like that many a time. But I can admit when the new era is better than something else or that's changed from the time I played. And the way they play, we would have a hard time keeping up 'cause, like I said, our game wasn't shooting 3s, which theirs [is]. And 3 beats 2."

Johnson agrees the Warriors are good for the NBA and that their style of play is exciting, but the five-time champion and three-time Finals MVP is still sticking with "Showtime."

"I think what [Curry and Thompson] have done for the league has been amazing," Johnson told First Take. "They are going to be great for this league, the NBA, for a long time, especially if they sign Steph to a long-term contract.