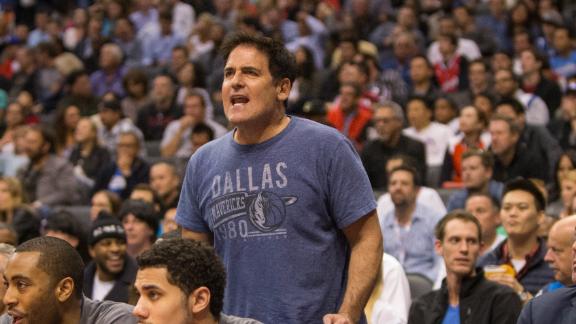 MEMPHIS, Tenn. -- Dallas Mavericks owner Mark Cuban considers the sale price of approximately $550 million for the Milwaukee Bucks to be a bargain, suggesting the true value of NBA franchises is north of $1 billion.

Longtime Bucks owner Herb Kohl announced Wednesday that he had reached an agreement to sell the team to hedge-fund billionaires Wesley Edens and Marc Lasry, a deal subject to approval by the NBA and its board of governors.

In January, Forbes valued the Bucks at $405 million, the lowest among the NBA's 30 teams.

But Cuban, who paid a then-record $285 million for the Mavericks in 2000, believes the NBA is in the midst of a business boom. Asked whether the league should consider adding an expansion team, Cuban said he would be on board, as long as the price was steep.

"I'm not opposed to it," Cuban said. "This is just me talking, but we'd be crazy to sell it for under a billion dollars."

After that comment, Cuban grinned and did a Dr. Evil impersonation, sticking the tip of his pinkie finger in the corner of his mouth. However, he's completely serious about the subject.

"Let's just say I'm bullish on the NBA," Cuban said. "Call it the NBAIX, the NBA index. I think it's underpriced right now. I'd invest money in that ETF."

According to Forbes, the New York Knicks, Los Angeles Lakers and Chicago Bulls are the only NBA franchises valued at $1 billion or more. Cuban's Mavs, at $765 million, have the eighth-highest value among the league's teams.

"I don't have any intention of selling it," Cuban said. "But if I were offered a trillion dollars, I'd take that."