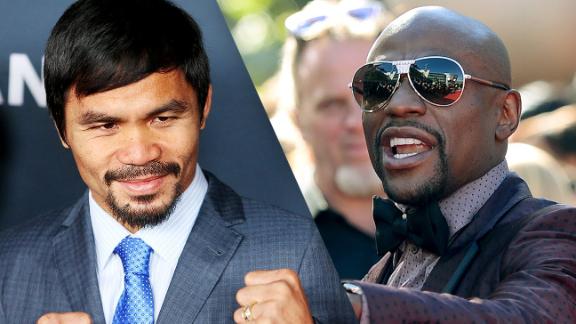 A fight between Floyd Mayweather Jr. and Manny Pacquiao wasn't announced during Sunday's Super Bowl, nor is it a done deal, but the two sides are approaching a likely make-or-break next few days.

After six years of on-again, off-again talks in which negotiations have failed multiple times, the two camps have hit a wall as they attempt to make a May 2 fight at the MGM Grand in Las Vegas happen.

"The thing that really concerns me is that we are running out of time for May 2," Top Rank promoter Bob Arum, who represents Pacquiao, told ESPN.com on Monday. "If you want to drag this out a little longer then move the fight to later in May -- May 30 is a good date -- or go in June. We agreed to go on May 2 because that is the date Mayweather is hung up on, but if we're going to go on May 2 we need to get this done."

If a meeting between the two welterweight champions in Pacquiao's Miami hotel suite last Tuesday night -- after they met face-to-face earlier in the evening and exchanged cell phone numbers during a chance halftime meeting at the Miami Heat-Milwaukee Bucks game they were coincidentally both attending -- led to the fight talks taking two steps forward, they have taken one step back in recent days.

While many were led to believe that the fighter camps were on the same page following the hotel meeting, and that the deal hinged only on CBS/Showtime, which has Mayweather under contract, and Time Warner/HBO, Pacquiao's exclusive network, finalizing a deal for a joint pay-per-view telecast, there are still open deal points between the fighters.

"There are issues that should be solved in 10 minutes, but it's a slow dance," Arum said. "We send one draft to their side and their lawyer sends back a draft with something else that's an issue. And there doesn't seem to be any urgency about it on their side. It's terrible."

Arum has negotiated many of the deal points for the bout through CBS chief executive Leslie Moonves, who has acted as a go-between for Mayweather and his adviser, Al Haymon. Arum said he continues to remain in touch with Moonves and that they exchanged emails on Monday trying to work out the issues.

"I've asked Les to expeditiously handle the points there are issues with," said Arum, who declined to go into the specific issues. "Moonves can handle it. The question is whether the Mayweather side will listen to him. If they're sincere about trying to make the fight it shouldn't be an issue, or are they playing a game? I don't know. I go back and forth. I thought they were always playing a game, that Floyd didn't want the fight.

"Then Manny and (adviser) Michael (Koncz) spent an hour or so with Mayweather in the hotel suite and they read it that, no, Mayweather really wants the fight. But I don't know. If people were really concentrating on this it could be done in no time."

Many of the issues that come up in a fight negotiation have been agreed to as Pacquiao, who has agreed to extend his Jan. 31-imposed deadline, and Arum have given in to one Mayweather demand after another. They include the financial split (60-40 in Mayweather's favor), Mayweather's preferred drug testing protocol (the one deal point that killed the initial negotiations in late 2009 and early 2010), the date, site, order of the ring walks and introductions and the name of the fight (Mayweather-Pacquiao). But there are still issues to work out.

"There are unresolved issues on both the fighter deal and the network deal. (The fighters are) on the same page regarding basic deal points but there are lot of meaningful items still unresolved," said one source involved in the negotiations.

The networks have been working on the terms in recent weeks, dealing with such issues as how to blend their on-air talent for the telecast, who will actually produce and direct the telecast in addition to numerous other production issues and how to handle the delayed broadcast.

According to sources involved in the talks, Showtime has pushed for a similar scenario they agreed to in their landmark 2002 deal to do a joint pay-per-view for the Lennox Lewis-Mike Tyson heavyweight title fight when Lewis was signed to HBO and Tyson was with Showtime. For that deal, they agreed that the network whose fighter won the fight would get the replay rights and pay the other network $3 million. HBO, however, according to sources, is pushing for simultaneous network replays of Mayweather-Pacquiao.

Stung by recent media reports that it is holding up a deal, HBO, which has not even publicly acknowledged the negotiations in the first place, issued a surprising statement on Monday in which it essentially said that nobody should blame it if the deal doesn't get done.

"We are not an impediment to this fight. We stand ready to go. The principals need to agree to terms and come to a deal," HBO Sports said in the statement.

If the fighters and networks do not reach terms both sides need to make alternative plans. Mayweather (47-0, 26 KOs) has said he intends to fight on May 2 whether it's against Pacquiao or somebody else, perhaps middleweight champion Miguel Cotto, of Puerto Rico, or former unified junior welterweight titlist Amir Khan of England.

The main target for Pacquiao (57-5-2, 38 KOs) in a backup plan to Mayweather is a May 30 fight against Khan, whom he met with and talked to about a possible deal during a trip to London two weeks ago.