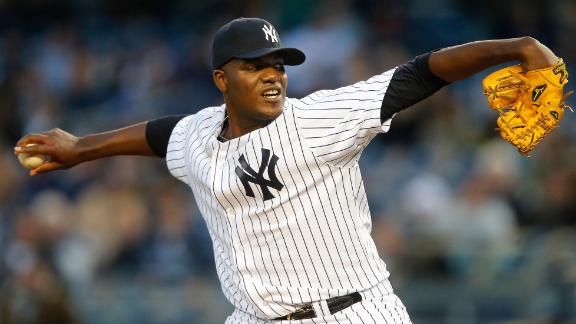 NEW YORK -- The Yankees will forgo another rehab start for Michael Pineda and throw him into the fire for Wednesday night's series finale against the Baltimore Orioles.

Originally, Esmil Rogers had been listed as the probable starter, and Pineda, who has made two rehab starts for Triple-A Scranton, had been slated to make one more. But with time, and games, running out on the Yankees in their quest to remain in the AL East race -- they trail the Orioles by six games, with 10 remaining between the teams -- the Yankees have decided to get Pineda back into the rotation.

"We feel he's ready now. It's nice," manager Joe Girardi said Monday. "This is a guy who threw very well before he went on the DL, and it'd be nice to have him back. I feel good about him taking the mound. We need him to pitch well these last seven weeks or whatever we have left.''

"I'm very, very happy for me," Pineda said. "Everything is the same. Everything looks good. I'm feeling powerful. I'm so excited.''

Pineda has not pitched in the major leagues since April 23, when he was ejected in the second inning of a game against the Boston Red Sox at Fenway Park for using pine tar on the ball, which he had smeared, rather clumsily and obviously, on the side of his neck.

He was given a 10-game suspension for the infraction, and suffered a strained lat muscle below his pitching shoulder throwing a simulated game while awaiting reinstatement. He went on the disabled list May 6 and missed the next 86 games.

"I know I make a mistake, so I learned from that," Pineda said Monday. "Everything is in the past right now. I want to continue my career and that's it. I'm focused on my game and I'm focused on pitching.

"I said sorry to my team and sorry to everybody, so now everything is in the past. I want to continue my career and I want to help my team right now."

In his first four starts, Pineda was among the most effective of the Yankees' starting pitchers, going 2-2 with a 1.83 ERA. Pineda allowed one earned run in 7 2/3 innings in his two rehab outings.