Mike McCarthy likes QBs' idea to try for 2 every time 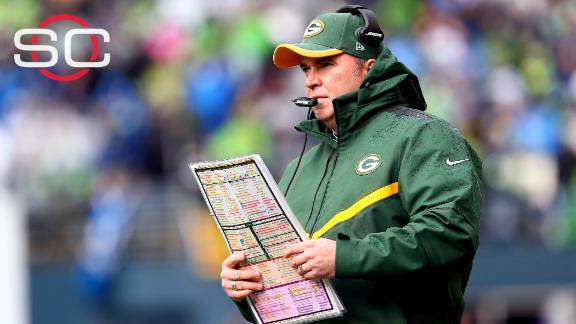 That said, the Green Bay Packers coach says the 2-point conversion conundrum isn't as simple as just believing you'll convert more than half your attempts -- even though he's absolutely certain that quarterback Aaron Rodgers and his offense would succeed far more often than they'd fail.

"Personally, I definitely agree with Ben and Drew. I think especially with Aaron being our quarterback, I would have zero issue as an offensive coach going for it every single time," McCarthy said Wednesday morning, in advance of the team's minicamp practice.

Roethlisberger said Tuesday that he'd like to see his Pittsburgh Steelers go for two after every touchdown this season, having converted 8 of 11 such situations last season for a league-leading 72.7 percent success rate.

"Put it in our hands. I want the ball. Any player would relish that opportunity," Roethlisberger said.

And in an interview on "The Dan Patrick Show" on Wednesday, Brees said he believes his New Orleans Saints would be just as successful, even though they converted only one of four attempts last season.

"Personally, I feel like if we went for two that we could make it more than 50 percent of the time," Brees told Patrick. "So, I'm all for it."

Brees said he doesn't think he needs to suggest the idea to Saints coach Sean Payton.

"I don't need to tell Coach Payton to be more aggressive," Brees said with a laugh. "I think we've got that part of it taken care of."

McCarthy said he believes the Packers would be successful because of Rodgers' ability in what he called the "tight red zone" area near the goal line and the quality of the plays they have in their offense for such situations.

"Just because of the way we're built ... and the volume of [offensive plays] which you would need to go the entire course of the year, I'm comfortable that we could attain that very easily," McCarthy said. "But I think you have to look at the whole picture, too.

"You have to look at the defense, the development of your special teams and so forth. I think there's a little more to the question than, 'Can we score more than 50 percent?' Because I definitely agree with what Ben and Drew are saying, because I would definitely have the confidence to go after a defense and win more than 50 percent of them."

Including the playoffs, the Packers were 5-for-7 on 2-point conversion attempts last season after converting just 2 of 12 2-point attempts the previous five years combined.

McCarthy opted not to go for two in the team's season-ending playoff loss at Arizona following Rodgers' 41-yard Hail Mary touchdown pass to Jeff Janis as time expired in regulation. Instead, McCarthy chose to have Mason Crosby kick the 33-yard extra point to send the game into overtime, where the Packers lost the coin toss and then lost the game without ever getting the ball back on offense.

The Packers' opponents were 1-for-2 on them last year in the regular season and did not attempt one in the playoffs.

Asked if he expects to go for two more often this season and have to defend more 2-point attempts on defense, McCarthy replied, "Well, we practice it a lot more. I think that was evident in training camp, I think it's evident just the way we train our football team. Now, the defense, we've got to make sure they're prepared for it and we're prepared to go for it [on offense]. It's definitely [a larger] part of our training."