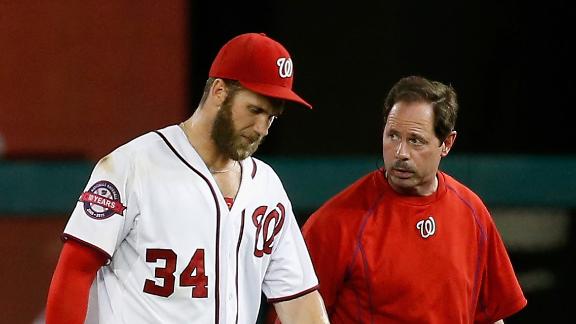 ESPN
WASHINGTON -- Bryce Harper's strained left hamstring kept him out of Friday's night's 4-1 win against Pittsburgh, which came as no surprise after his nasty spill in the outfield less than 24 hours earlier.

The real question is: How many more games will he miss?

Nationals manager Matt Williams opted against placing the two-time All-Star outfielder on the disabled list but didn't rule out the possibility of ultimately making that move to ensure the long-term health of the team's best hitter.

"He's sore," Williams said. "We're evaluating every day, and we'll take the appropriate steps necessary to make sure that he's 100 percent ready to go when he's ready to go."

Harper received medical treatment Friday and was going to attempt to take some practice swings. He did not speak to reporters.

Harper slipped on damp grass in the sixth inning Thursday night against Tampa Bay and gingerly walked off the field.

"I've had problems with my left knee before -- I've had surgery on it," Harper said. "So you know, it was definitely really scary."

Williams probably held his breath, too, given how important Harper is to the team. The 22-year-old is hitting .344 with 22 homers and 53 RBI, numbers that rank in the top 3 of each category in the NL.

"The surface was wet and he slipped. That was the knee he had surgery on," Williams noted. "So, that being said, we want to be cautious. We're taking the appropriate steps. For today we want see how he feels. Then if we have to get further tests, we'll do so."

Harper was replaced in right field by Clint Robinson, who was batting .270 with two homers and eight RBI.

"He's the first-half MVP of the National League, and for him to be out, you can't really replace a guy like that," Robinson said. "We'll just go out there and hope to fill the gap as good as we can."

Robinson had no intention of trying to duplicate Harper's performance as Washington's cleanup hitter.

The Pirates, who came in with an eight-game winning streak, considered themselves fortunate to avoid pitching to Harper.

"It would be like our lineup with (standout outfielder Andrew) McCutchen versus not having McCutchen. Significant," Pittsburgh manager Clint Hurdle said. "It doesn't mean a lineup without him can't beat you and can't score runs. It's just significant."