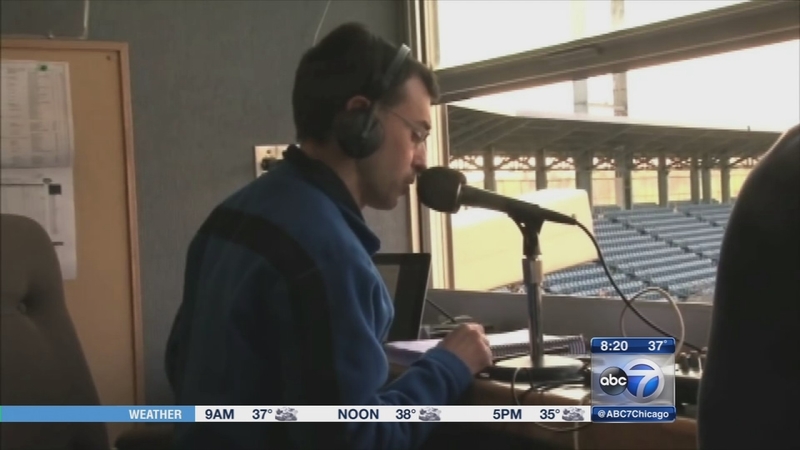 CHICAGO (WLS) -- It may not feel like it but baseball season is right around the corner. In fact, some White Sox players reported for camp last week.

While the start of a new season always brings hope and optimism, for one member of the Sox organization, it is especially exciting.

He is a hometown boy called up to the big leagues from the south suburbs to the Cell. All eyes will be on the ground-breaking new television announcer this year, and he wouldn't have it any other way.

As Jason Benetti was introduced to the fans at Sox Fest recently, the team's new television announcer says it was all a bit surreal.

"I feel like I'm living someone else's life right now. I feel like, one day somebody's going to say 'no this was someone else. We got the wrong guy. We spelled it wrong.' Or something like that!" Benetti says.

The 32-year-old graduate of Homewood-Flossmoor High School in the south suburbs is living with cerebral palsy. And he's believed to be the first person with this physical disability to hold that spot in major league baseball.

"I had a scout, I was in A-ball in the Carolina league, I had a scout ask me if I had polio and my response was, I wanted to say, 'Sir, that has been eradicated for decades. You know this vaccine...they've done amazing scientific research nowadays!'" he says.

He likes to laugh at himself but this veteran broadcaster realizes, at first, some people may watching him as much as the game.

"I grew up here, I understand this community and the people in it. I'm a South-sider. I do understand where people are coming from. So I think people may cling to any trait at the beginning of this. But at some point it's how you do the game and that's what matters," Benetti says.

And make no mistake about it: is the real deal. He has been doing play-by-play in football and basketball for ESPN since 2011 and the Syracuse graduate has also been doing AAA baseball for five years. He says his disability has never been an issue.

"In terms of on-air or anything like that no. It really doesn't affect the way I do a game or the way I even get to a booth. I've crawled through portholes to get to a booth, climbed up ladders. I mean any number of things to do a game," he says.

Now he's just anxious for the season to get started and the hype about him to die down. Until then, Benetti is enjoying the ride and letting it all sink in.

"It's one of those moments where you say 'no matter what happens, this will never bet taken away,' he says.

Jason has already been working closely with the cerebral palsy association and meeting with individuals with disabilities.

His first game will be April 9 when the White Sox take on Cleveland at U.S. Cellular Field