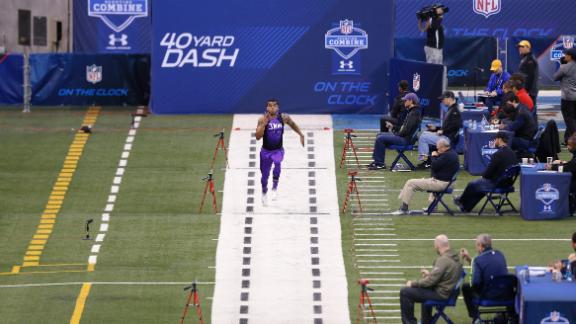 The NFL will reconsider tweaking its long-standing timing and testing drills at the scouting combine this offseason.

"That's a project we'll be working on this offseason," Matt Birk, the league's director of player development, said Friday. "Once we look at the data that was gathered in-game this year, it may be important to know how fast a wide receiver or defensive back can go 60 yards. Maybe for an offensive lineman it's only 20 yards.

"We can actually see that in-game: How far are these guys running? What are the real or improved measures of importance and value as it relates to evaluating players and whether or not they should be drafted in the first round or the sixth round?"

Birk was speaking as part of a panel on advanced NFL statistics at the MIT Sloan Sports Analytics Conference in Boston.

The NFL has used a standard set of drills, including a 40-yard dash, 20-yard shuttle and three-cone drill at its scouting combine for several decades, including the most recent combine held earlier this month in Indianapolis.

"We run the 40-yard dash in Indianapolis. Why? The only reason anyone can ever give you is, that's how it's always been done," Birk said.

New Orleans Saints coach Sean Payton, who also spoke as part of the panel, anticipated changes in the combine process.

"I think we're in the midst of seeing some of these measurables change. I know we are," he said. "We're going to look at position-specific and be willing to start with a certain year and build from that point forward.

"There's been a ton of studies being done now on your bone length as it pertains to your chances of playing a receiver position, chances of playing a defensive back position. How is your chassis basically made up of? Now when you're actually putting it to movements other than a cone drill, I think that's in the long term going to show up in a player evaluation."

Payton believed that new testing could be implemented over time.

"I think you'll gradually see position-specific change where it won't be just one whole new set of drills," he said. "It will gradually phase itself in as we know more and more what we're looking for for an offensive lineman, compared to a running back."