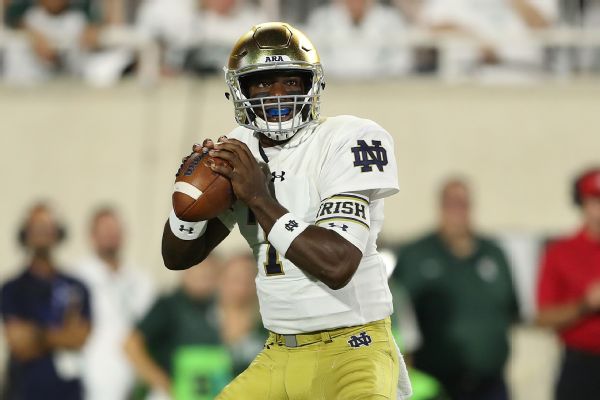 SOUTH BEND, Ind. -- Quarterback Brandon Wimbush has a walking boot on his right foot as No. 21 Notre Dame prepares for Saturday's game at North Carolina.

The injury to the 228-pound junior, who has guided the Irish to a 4-1 start, came to light at a mandatory Sunday check-in following Saturday's 52-17 home victory over Miami (Ohio). Wimbush later underwent a precautionary MRI and X-rays that revealed no structural or ligament damage.

"He experienced some foot soreness after the game, so we put him in a walking boot, which is fairly typical," coach Brian Kelly said Tuesday.

Kelly didn't want to speculate whether Wimbush would be questionable or probable for the game against the Tar Heels, who are 1-4 after a 33-7 loss to Georgia Tech. Wimbush might do some light throwing Tuesday -- Notre Dame's first time on the field since Saturday -- with backup Ian Book getting most of the reps with the first-team offense in practice.

"I would think [Wimbush] would have to do something Wednesday," Kelly said. "But does he need to take 60 percent of the reps? Probably not. We've done our due diligence here. We want to make him obviously feel good, and he's got to feel comfortable, and a lot of this is not just medical. He's got to feel 100 percent like he can put his foot in the ground and do the things that he can do."

"I'd talk to anybody that has speculative information out there," Kelly said. "I trust what Brandon tells me. I have no reason not to trust 100 percent when Brandon tells me. He went out and felt his foot was not right, and he went home. That's what he told me. I believe him. I have no reason not to believe him based upon my relationship with him over the last three years."

Wimbush, a dual-threat quarterback who sat out last season, has rushed for 402 yards and eight touchdowns while competing 52.3 percent of his passes for 782 yards and six scores with two interceptions.