On transfer rule, catch equals out 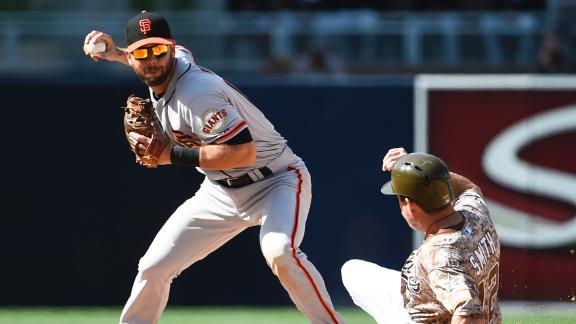 Catch the ball, get an out.

When baseball instituted its new replay rules, it essentially changed the definition of a catch when a fielder was trying to turn a double play at second base, saying that the player had to not only catch the ball but maintain control of it as he removed the ball (transferred it) before throwing to first base.

Now baseball has gone back to the original definition, which says the fielder gets one out if he makes the catch -- even if he drops the ball when trying to transfer it for a throw.

The play was in the spotlight in Thursday night's Boston Red Sox-New York Yankees game, when Dustin Pedroia was given an error after dropping the ball on a transfer while trying to turn a double play. Brett Gardner was called safe on the play, but replays showed Pedroia made the original catch and therefore should have gotten an out.

"There is no requirement that the fielder successfully remove the ball from his glove in order for it to be ruled a catch," MLB said in a statement Friday.

Baseball said the interpretation of its playing rules committee was agreed to by the players' association and the umpires' union.